In a speech to global leaders at the U.N., President Trump blasted Iran’s bloodlust and defended the trade war with China. He also offered a strong defense of national sovereignty, saying that the free world must embrace its national foundations and protect its own people and interests. 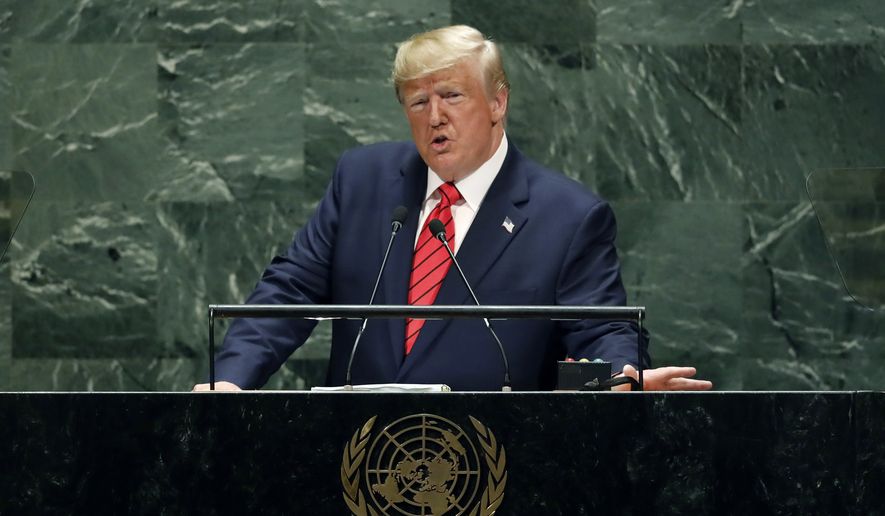 Mr. Trump called on nations to follow his lead by paying their “fair share” to mutual defense. He also urged them to resist socialism, echoing his leading 2020 campaign attack against Democratic foes, and urged nations to protect the rights of its gay citizens.

He defended religious liberty for all, and urged social media companies not to silence its users, citing the right to free speech.
And, evoking a signature priority, he asserted each nation’s right to fair and reciprocal trade rules.

“For decades, the international trading system has been easily exploited by nations acting in bad faith. As jobs were outsourced, a small handful grew wealthy at the expense of the middle class,” Mr. Trump said. He called on Congress to pass his rewrite of the 1990s-era North American trade deal, touted a pending deal with Japan and ambitions in the U.K., which is figuring out how to leave the European Union.

Source: Trump To World Leaders: ‘The Future Does Not Belong To Globalists’ | Washington Times

No Comments on "Trump To World Leaders: ‘The Future Does Not Belong To Globalists’"