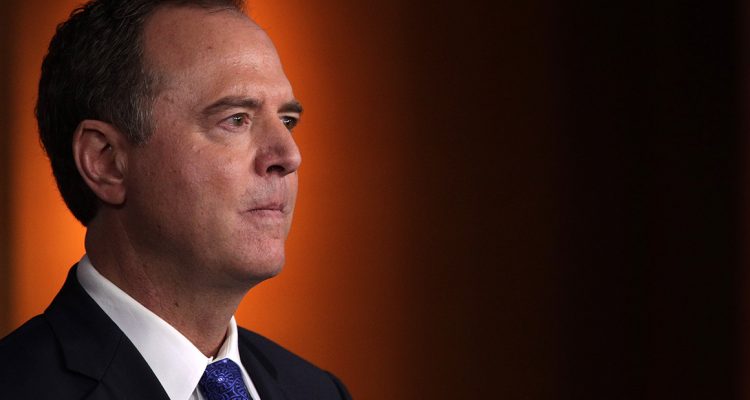 “It shows that Schiff is a fraud. I think it’s a scandal that he knew before,” Trump said. “I’d go a step further. I’d say he probably helped write it. That’s a big story. He knew long before, and he helped write it to. It’s a scam.”

President Trump referred to Schiff, who claimed to have surefire evidence that Trump illegally conspired with the Russians, as “Shifty Schiff” and stated that the Democrats impeachment inquiry was a “fraudulent crime on the American people.”

Earlier this morning, Trump described the inquiry as “BULLSH*T” and called Schiff a “lowlife.” He also mocked Schiff for reciting an inaccurate, exaggerated version of the president’s call with the Ukraine President, something Schiff tried to then pass off as a parody.

The Do Nothing Democrats should be focused on building up our Country, not wasting everyone’s time and energy on BULLSHIT, which is what they have been doing ever since I got overwhelmingly elected in 2016, 223-306. Get a better candidate this time, you’ll need it!

The President also called Joe and Hunter Biden “Stone cold crooked,” commenting on Hunter’s business dealings in Ukraine while his father was vice president. Trump then went on to threaten litigation for false accusations by “the fake news media” and “in many cases, the corrupt media.”

LOOK AT THIS PHOTOGRAPH! pic.twitter.com/QQYTqG4KTt

Bizarrely, it was the New York Times who broke the story that Schiff had learned about the whistleblower’s complaint days before it was filed. Speaking to Fox News, Schiff ‘s office denied the intelligence committee had reviewed or received the complaint in advance, but they did mainly confirm the Times article.

Republicans have suggested that others beside chef may have had advance notice. For example, House Republican Conference Chairman Liz Cheney demanded answers in a tweet of how much Nancy Pelosi knew after comments she made on CBS Sunday night.

Unfit ⁦@RepAdamSchiff⁩ and @SpeakerPelosi must come clean. The American people deserve the truth.

What did ⁦@RepAdamSchiff⁩, @SpeakerPelosi and other Dems know and when did they know it? https://t.co/QdVSxnTMDJ via @NYTimes