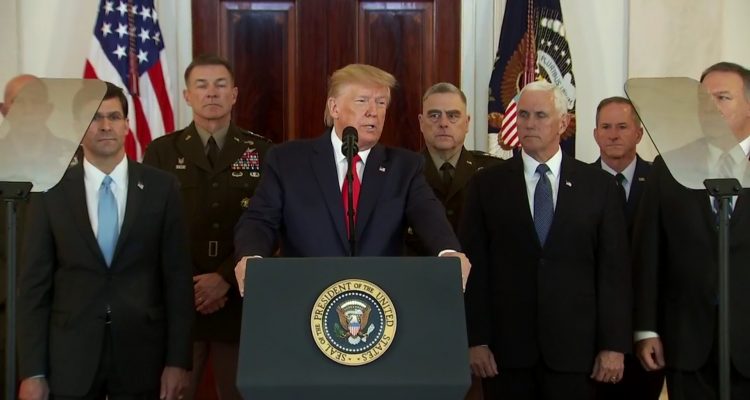 President Trump addressed the nation this morning after Iran responded to the US drone strike that killed their top General last week with an attack of their own.

The President announced that no US or Iraqi soldiers were killed, or even injured, when Iran fired missiles at two US bases in Iraq, in the retaliatory “Operation Martyr Soleimani”.

President Trump began his speech by stating bluntly,
“As long as I am President, Iran will never be allowed to have a nuclear weapon.”

He continued,
“No Americans were harmed in last night’s attack by the Iranian regime. We suffered no casualties, all of our soldiers are safe and only minimal damage was sustained at our military bases. Our great American forces are ready for anything. Iran appears to be standing down… No American or Iraqi lives were lost because of the precautions taken.”

The President then justified the killing of Soleimani, calling him “the world’s top terrorist” and a “monster” before citing the atrocities committed by the Iranian leader.

Trump added,
“He should have been terminated long ago. By removing Soleimani, we have sent a strong message to terrorists- if you value your own life, you will not threaten our people.”

The President pointed out the unfortunate truth that the missiles fired at us last night were, in a way, paid for by President Obama’s controversial billion dollar cash drop to Iran.

President Trump condemned Iran for the recent killing of 1,500 of its own people when protests broke out across the country last year.

But he also called for peace and a new agreement between the West and the rogue nation, announcing his intention to have NATO much more involved in the peace process.

“We do not need Middle East oil,” the President declared, citing the US’ recent emergence as the world’s top energy producer.

He continued, “Under construction are many hypersonic missiles. The fact we have this great military and equipment, however, does not mean we want to use it. We do not want to use it.”

The President called for advancing the two countries mutual interests, calling ISIS a “natural enemy” of Iran and calling for more cooperation on that front among others.

Trump concluded with an olive branch,

“Finally, to the people and leaders of Iran, we want you to have a future and a great future… the United States is ready to embrace peace with all who seek it.”

In the end, President Trump was able to strike fear in the hearts of would-be enemies without starting an all-out war and the Iranian regime was able to “save face” by striking back without killing or injuring a single American soldier.

No Comments on "President Trump Addresses Nation, Calls For Peace With Iran"