California often has wildfires, but the deadliest in the State’s history took place in 2018 when a fire tore through the town of Paradise, killing 85 people.
In 2018, Pacific Gas & Electric (PGE) was bankrupted due to liabilities from wildfires created by power lines. As a solution to prevent potential issues for 2019, they cut the power off, which affected approximately one million homes and businesses in October. Many are blaming climate change for the fires.
Actor Leonardo DiCaprio stated, “The reason these wildfires have worsened is because of climate change.” “This is what climate change looks like,” said Rep. Alexandria Ocasio-Cortez.
California Governor Newsom responded to President Trump over the weekend, saying since the President doesn’t believe in climate change, he was excused from the conversation. President Trump had criticized the Governor saying he’d done a terrible job of forest management. 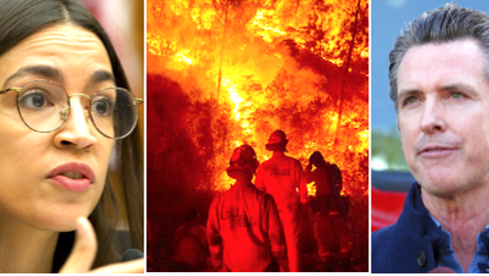 Source: Why Everything They Say About California Fires — Including That Climate Matters Most — Is Wrong | Forbes