You’ve GOT to be kidding me. A “flip the vote” flippin crazy bus tour is coming to a city near you.

And who is funding this? I don’t know but I can guess. Rhymes with Boros.

Have you guys seen the blatant mocking of Christians by Bill Maher, John Oliver, SNL and other comedians? I wonder if the “flip the vote” preachers feel any solidarity with their brothers when they are being mocked? Progressive preachers probably see themselves as more hip. “Woe unto you when all men speak well of you” is not a favorite verse of those who labor to be culturally relevant to the Huffington Puffington Post.

Never occurred to me that the totalitarian “hate speech” police from the left who hunt down conservative speakers on campus and harass Republicans in restaurants and theaters would find preachers backing them. I understand “Jews for Jesus” but who expects “Jews for Jihad?” That’s what flippin preachers make me think of.

But then again I’ve always been puzzled by church leaders who support the party that targets and prosecutes Christian florists, photographer’s and bakers, hounding them till they are bankrupted or forced out of business.

And who does not know that this same spirit of intolerance cannot wait for the winds of political sentiment to change so they can get in power and corner you for preaching “hate” when you preach the Bible?

What’s holding these forces of anarchy back? The grace of God, a fragile thing called “the first amendment” and a friend in office called Donald Trump. And trust me, it’s fragile alignment right now because vindictive Leftists have control of media, Hollywood and academia. They have also hijacked the politics of the Democratic Party. You can see the fruit of their propaganda in the 94% negative coverage of Kavanaugh and the deranged behavior of screaming protesters clawing at the doors of justice.

You think evangelical florists and bakers and photographers weren’t a warm up act for other Christians in other professions? Anyone who does not bow the knee to the Progressives Baal will be thrown into the lions den eventually.

It’s not even politics we are dealing with, it’s a spirit of AntiChrist. It’s the spirit that combined Herod and Pilate with the Pharisees in order to kill Jesus. The new progressive is both religious and totalitarian in nature. They want to transform the world and they need political power to police thought and establish the new order. The modern Leftist is in search of a Utopia that can not arrive till people like you are converted or removed as a hindrance. Theirs is a counterfeit kingdom movement.

In that sense, I am not surprised to see clergy joining the cause. The modern Progressive quest to transform culture is, in fact, a counterfeit of Jesus command to go make disciples of nations. The problem is the new Democratic Party is more zealous to disciple America than conservative Christians are.

To achieve this, they have seized the high places – the Gates of influence (media, academia, arts, and government) and from these powerful platforms they preach their message. Pick any subject: sex, marriage, gender, patriarchy (the role of men) debt, borders, Israel, racism. They have a false doctrine for virtually every subject; the most dangerous being the denial of personal responsibility, substituting in its place a theology of victimhood, resentment and political rage. Their doctrine is both insidious and highly effective.

And I’m not talking about the church preachers here. They are just the next phase of the cultural roll out. Clergy are being used by the Left to confuse and hinder the evangelical vote. Especially the white evangelical vote.

For progressive preachers to do what they do they must ignore the data – the hard left are agnostic. They especially don’t like Bible believers. Even their own.

Remember – the screaming progressives are secular religious zealots driven to establish a counterfeit utopia. Their leaders have stoked the fires of rage and resentment over distorted issues of “justice.” In a scary sense this is like radical Islam, a religious quest wrapped in a political disguise. Its ultimate enemy is CHRISTIAN Biblical absolutes. Its ultimate enemy is you.

They want to be the controlling power at the gates of influence. The Bible warns of false teachers and false prophets in the last days. The new religion is secular fundamentalism. Media has become the FALSE Prophet and College Professors the FALSE Teachers – the counterfeit Rabbi’s who make their disciples “twofold more the child of hell than yourselves,” as Jesus warned. (Mt. 23:15)

But I digress. This new bus tour matches what I heard the Left was cooking up in a “Rediscover Jesus” tour designed to invade evangelical millennial movements.

Can someone find out who is funding this evangelism crusade?

What was it’s origin?

Where will they be speaking?

Ever notice how the Left never has an issue with separation of church and State when it comes to their own agenda?

Could this be the start of a reformation within the timid politically disengaged largely fragmented evangelical church? 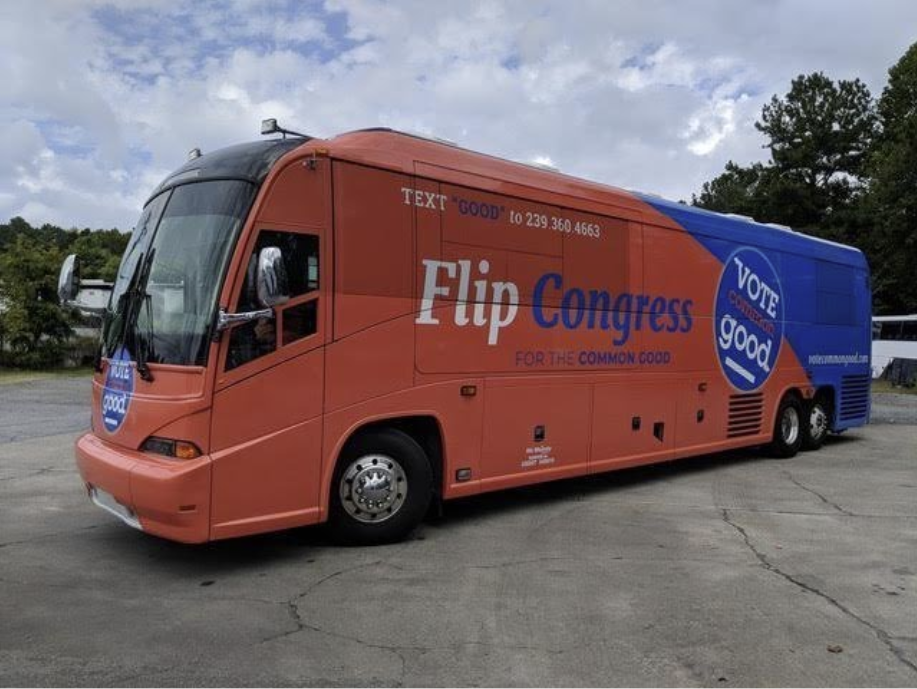 Source: Anti-Trump Evangelicals Are On A Nationwide Bus Tour To Flip Congress

No Comments on "You’ve GOT to be kidding me."