THIS is why you should NEVER ASK if the person running for office is a Christian!

When it comes to electoral politics, if you want to get spiritual, ask if the person is “anointed” for the assignment.

The STRANGE TRUTH is that someone can be a very non-religious Churchill, Lincoln, Reagan, Trump and be anointed and appointed by Providence for the task – or they could be a Christian who does not know what he is doing.

A bunch of us were so excited when Pat Robertson announced on the 700 Club that we had a man running for President who was unashamed to say he was “born again” – that man was Jimmy Carter. Robertson had been leading us in prayer for revival in each 700 Club broadcast and was excited to see a Christian running for President. Who wouldn’t be? Jimmy Carter was indeed a Born Again Christian, and won the election.

He proved to be one of the most incompetent leaders we ever elected to office. He got the smart idea to come out against tax exemption for certain Christian non-profits, then gave up hostages to Iran for 444 days and drove us into hyperinflation and economic decline while motorists were lined up for blocks at gas pumps.
Thank God Jimmy Carter created the climate for a different type of leader – Ronald Reagan!
To Carter’s credit, he did great work after he was President. It’s called “habitat for humanity.”

Unfortunately, Carter eats up this social capital by saying dumb things on a fairly regular basis.
Reminding us that the key question is never “is he or she a Christian?” The question should be “is he or she anointed for this?”
What track record do they have in solving these sort of problems?
What are their core principles?
Is there evidence that their values and principles are deep and fixed and compatible with Christian values?

And yes – if they are a Christian that is a plus, but Carter is the argument that being Christian is never enough. 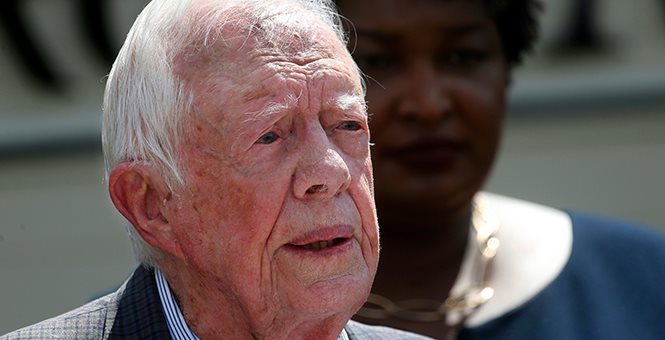