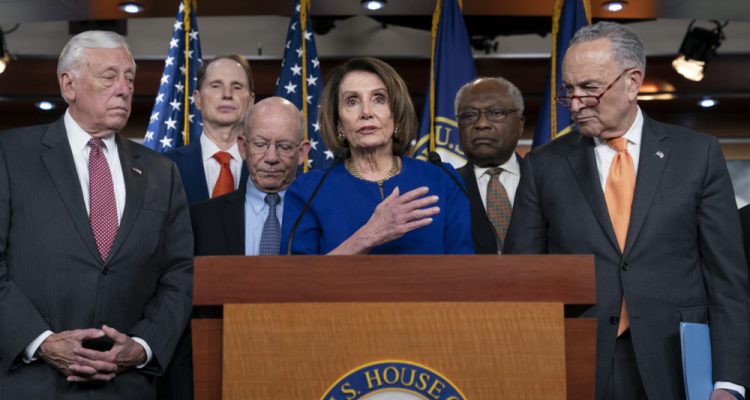 As House Speaker Nancy Pelosi “digs her heels in” on the so-called “impeachment inquiry”, the Trump White House has sent a defiant letter to the Speaker’s office announcing it will not comply with the “unlawful and unconstitutional” probe.

The letter begins undermining the credibility of the self-titled charade,

“Dear Madam Speaker… I write on behalf of President Donald J. Trump in response to your numerous, legally unsupported demands made as part of what you have labeled… as an ‘impeachment inquiry.’”

“Put simply, you seek to overturn the results of the 2016 election and deprive the American people of the president they have freely chosen. Many Democrats now apparently view impeachment not only as a means to undo the democratic results of the last election, but as a strategy to influence the next election, which is barely more than a year way.”

The author then cites the words of U.S. Rep. Al Green (D),

“As one member of Congress explained, he is “concerned that if we don’t impeach the President, he will get reelected.” Your highly partisan and unconstitutional effort threatens grave and lasting damage to our democratic institutions, to our system of free elections, and to the American people.”

“Resolved, That pursuant to Article I, Section 5, Clause 2 of the United States Constitution, Representative Nancy Pelosi, be, and she hereby is, expelled from the House of Representatives and the Office of the Speaker is declared to be vacant.”

Dr. Ralph Abraham is also in a highly-contested 3-way race for Governor of Louisiana. President Trump has announced that he will be visiting the Bayou State this Friday, on the eve of the election, to help rally support for the Republican candidates.

No Comments on "White House Sends Pelosi Scathing Letter, US Rep Calls For Her “Expulsion”"