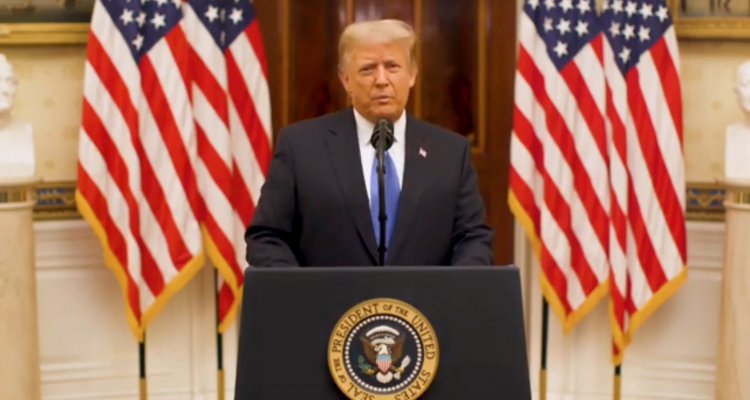 The day before Inauguration Day, President Donald J. Trump delivered his farewell address to the Nation as the 45th President of the United States.

“We did what we came here to do and so much more,” he began before wishing “luck” upon the new administration and thanking the “spectacular” First Lady, the First Family, Vice President Mike Pence, his administration & staff, the Secret Service, and all military members.

“Most of all, I want to thank the American people. To serve as your president has been an honor beyond description. Thank you for this extraordinary privilege,” Trump added.

The President decried political violence as “an attack on everything we cherish as Americans” and called for the country to unite around our shared values and rise above political divisions.

Trump reflected on his presidential journey, calling himself “the only true outsider ever to win the presidency” and said he ran to put America first and give back to a nation that has given him so much.

“The world respects us again,” Trump declared before commemorating his foreign policy achievements including the destruction of ISIS, execution of Bakr al-Baghdadi and Qasem Soleimani, the recognition of Jerusalem as Israel’s capitol, peace in the Middle East

“Americans should take tremendous satisfaction in all that we have achieved together,” he remarked before calling for citizens to continue to believe in our national identity.

President Trump called for an embrace of free speech and an end to “political censorship and blacklisting” which he called is antithetical to American values.

“As I think back on the past four years, one image rises in my mind above all others,” he proclaimed. That image was the thousands of supporters who would line the roads waving American flags as the motorcade passed to show their love for him and our country saying, “It never failed to deeply move me.”