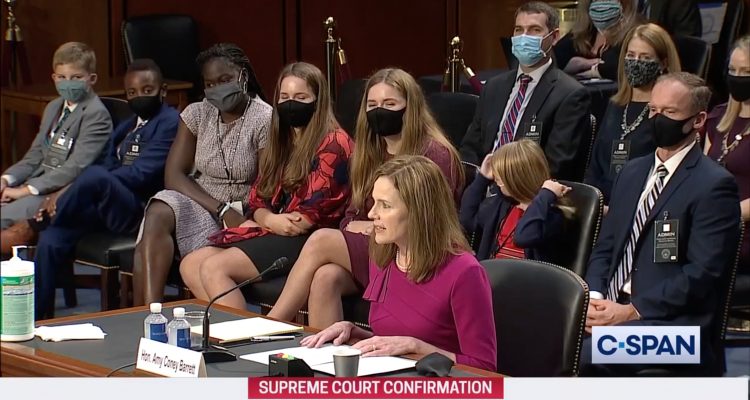 President Trump’s Supreme Court nominee began her journey through the gauntlet of what has become the hyper-politicized process of confirmation hearings in the U.S. Senate.

That journey began in the Senate Judiciary Committee which is chaired by Senator Lindsey Graham (R-SC) where Amy Coney Barrett provided a well-received opening statement.

Judge Barrett introduced her family of nine including her seven children which include two adopted children from Haiti and her husband Jesse who have been married for 21 years.

She explained that she clerked for Supreme Court Justice Antonin Scalia and admired his dedication to the rule of law, fearlessness, and originalist philosophy.

“…courts are not designed to solve every problem or right every wrong,” she explained. “The policy decisions and value-judgements of government must be made by the political branches, elected by and accountable to the people.”

“I believe Americans of all backgrounds deserve an independent Supreme Court that interprets our laws and constitution as they are written,” she continued. “And I believe I can serve my country by playing that role.”

“I believe in the power of prayer and it has been uplifting to hear that so many people are praying for me,” she added before concluding, “And if I am fortunate enough to be confirmed, I pledge to faithfully and impartially discharge my duties to the American people as an Associate Justice to the Supreme Court.”

You can also see her nomination acceptance speech from the White House below:

Republican Leaders Have Reached An Accord With The Dems | Townhall

Townhall: In breaking news released this afternoon, the Republican leaders have reached an agreement with...More

I Want To Be Wrong About This Brett Kavanaugh Attack

﻿   I don’t feel good about this Kavanaugh attack and where it’s going. Ann...More