People from 115 nations made up of 1,000 foreign ministers, religious leaders and others, gathered for the second Ministerial to Advance Religious Freedom this week. Researchers and human rights activists stated that it is time for nations, organizations, and individuals to take action and stop the crimes being committed against humanity in China who kill people to harvest organs. 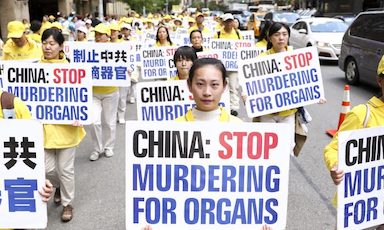 The report states, “Unlike black market organ trafficking operations elsewhere in the world, the on-demand killing of prisoners of conscience for organs in China is driven by the state, run on an industrial scale, and carried out by both military and civilian institutions.”

Grace Yin, founder and lead researcher of COHRC, and co-author of the COHRC report, said that after years of researching and studying, it can be established that killing people on demand for their organs has become a large scale “industry.”

No Comments on "‘Unmatched Wickedness’ In China Needs Action From All Nations, Says Human Rights Group"