The Washington Post: Prime Minister Benjamin Netanyahu, made a surprise visit to American-born Israeli citizen Ari Fuld’s grieving family on Sunday. Fuld had been attacked by a young 17 year-old Palestinian, and even as he was dying from his wounds, he went after the 17 year-old. The attack took place outside a supermarket at a busy intersection in the Israeli-occupied West Bank, a location known for deadly attacks. 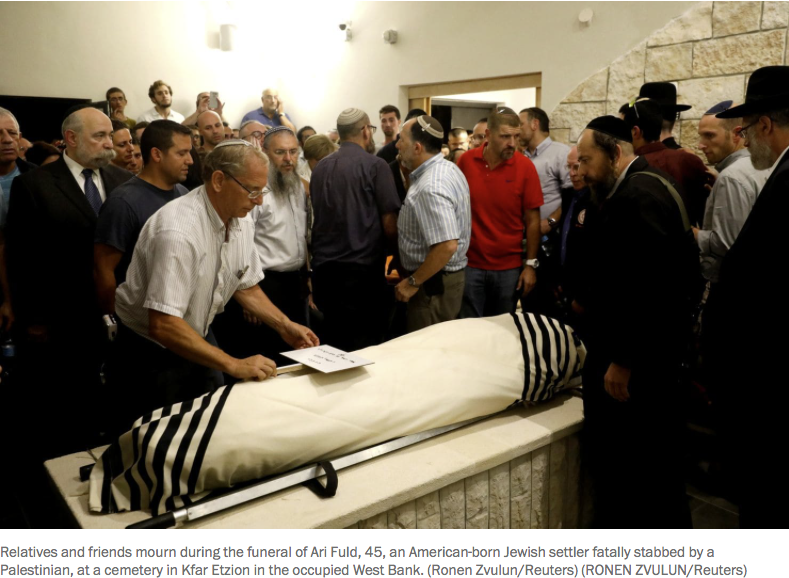 In addition to Netanyahu and other Israeli politicians, thousands turned out to attend Fuld’s funeral late Sunday at the Israeli settlement of Kfar Etzion.

A father of four, Fuld was assistant director at Standing Together, a nonprofit organization providing support for Israeli soldiers. He also regularly engaged in advocacy for Israel known as hasbara, which means “explanation,” but which Israel’s critics describe as manipulative propaganda. Local media reports said Fuld was about to launch an Israel advocacy website in English.

Source: U.S.-Born Israeli Citizen Killed In Terrorist Attack Is Hailed By Netanyahu As A Hero | The Washington Post

No Comments on "U.S.-Born Israeli Citizen Killed In Terrorist Attack Is Hailed By Netanyahu As A Hero | The Washington Post"