WHAT DO YOU THINK? Are men inherently less reliable than women? Should we simply “believe all women”?

Ben Shapiro asks the question in this post saying…

Some feminists and leftist activists say “yes.” They say that Ford’s credible account is all we require to end Kavanaugh’s professional and personal life.

• This week, protesters accosted Senator Ted Cruz (R-TX) and demanded that he “believe survivors.” Kavanaugh’s denials mean nothing.
• Ford’s lack of corroborative evidence means nothing. The inconsistencies in her account mean nothing.

But the data simply do not support such a conclusion. We can’t start ruling out the value of corroborative evidence in the religious belief that women always tell the objective truth, or get their stories exactly right. That’s simply not true.

According to defense lawyer Alan Dershowitz, “There is no empirical evidence supporting the gender-based political view that women who claim to have been sexually assaulted in alleged acquaintance-rape situations tell the entire truth more often than men who are accused and deny the accusation.”

One report from the U.S. National Research Council explains that eyewitnesses are notoriously unreliable: “Unknown to the individual, memories are forgotten, reconstructed, updated, and distorted.”

• Elizabeth Loftus of the University of Washington points out that memories can easily be distorted by misinformation; in her words, memories are “more easily modified, for instance, when the passage of time allows the original memory to fade.”

• False memories “are constructed by combining actual memories with the content of suggestions received from others.” In a small-scale study performed by Loftus, fully 25 percent of respondents remembered false events constructed for them, and insisted that those events were real memories.

What about the notion, promoted by Ford in her testimony, that “indelible impressions” are left on the memory when terrible events occur? Research doesn’t back that idea. According to a well-cited paper in Nature, “findings from basic psychological research and neuroscience studies indicate that memory is a reconstructive process that is susceptible to distortion.”

The study further condemns as a myth the “commonly held belief among the general public…that an eyewitness’s confidence in the accuracy of his or her memory is a strong indicator of the actual accuracy of the memory.” Long-term depression can also adversely affect memory retention as well.

This is why no allegation, no matter how credible on the surface, should be taken at face value without a scintilla of corroborating evidence.

That’s also why prosecutors don’t take cases based on allegations alone—as David French of National Review points out, 44.9 percent of all cases of sexual violence measured by the National Sexual Violence Resource Center never proceed to a courtroom, which means it’s incredibly difficult to tell whether a false allegation has been made or not.

Ford may very well be telling the truth; she may also believe she’s telling the truth about an event of which her memories are hazy.
• What’s certain is that not a single witness she has named corroborates her story, and she hasn’t provided any details on location or date that would make it possible to verify her story.
• To suggest that more evidence is necessary in order to destroy Brett Kavanaugh’s life isn’t a slander against her—it’s a call for some semblance of a rational due process, even in matters of public opinion.

Ben Shapiro is editor-in-chief of The Daily Wire and host of The Ben Shapiro Show, available on iTunes and syndicated across America. 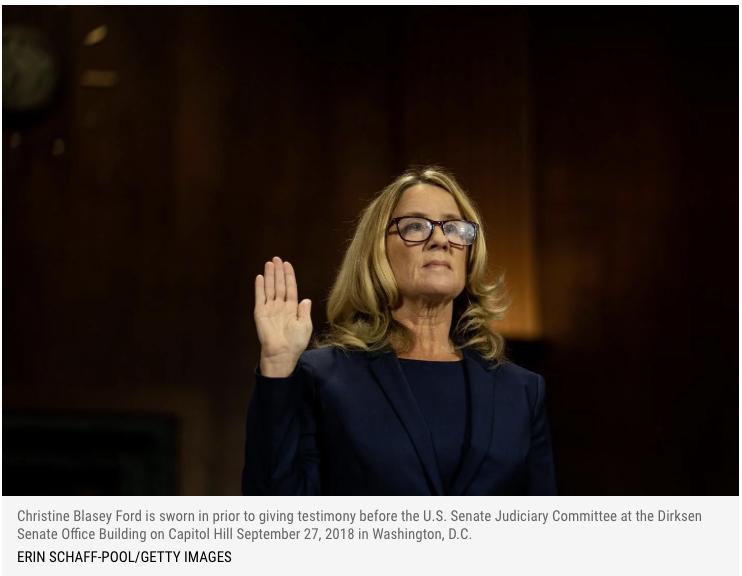 No Comments on "TWO BELIEVABLE TESTIMONIES, NO CORROBORATING EVIDENCE"