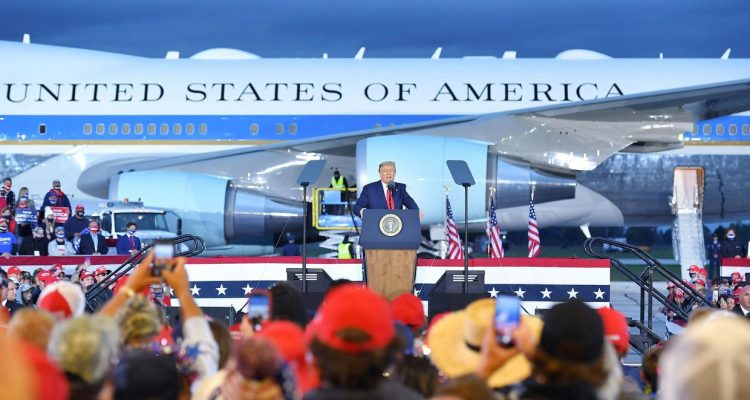 The president won Michigan and North Carolina in 2016 but Nevada has not voted for a Republican President since 2004.

At each of the rallies, supporters adorned facemasks reading “Trump” or “MAGA” and held up signs reading “peaceful protester,” a dig at the double-standard Democrats seemingly applied to protests as opposed to churches and other large gatherings.

President Trump was greeted by a massive crowd in Winston-Salem, North Carolina which he said was as high as 15,000. “If Biden wins, China wins. It’s as simple as that,” Trump told the sea of supporters. The President boasted the creation of 10.6 million jobs over the past four months and decried Joe Biden’s plan to raise taxes by $4 trillion. He touted U.S. energy independence, rebuilding the military, and lowering healthcare costs to name a few.

A crowd of roughly 10,000 welcomed the President to Freeland, Michigan where he criticized Joe Biden’s record on jobs, immigration, and foreign policy. It was at this point that the crowd began chanting, “We love you! We love you!” to which Trump quipped, “Don’t say that, I’ll start to cry, and that wouldn’t be good for my image.”

See the heart-warming moment for yourself below:

"Don't say that, I'll start to cry," President @realDonaldTrump says to the crowd in Michigan chanting "WE LOVE YOU!" pic.twitter.com/uLNOzYS2hp

In northern Nevada, President Trump addressed an enormous crowd of 30,000. He expressed outrage at a new ad from the Biden campaign which depicts him calling fallen service members “losers,” saying there are 25 witnesses that can testify that it never happened. He called Joe Biden a “pathetic human being” for airing the ad in the first place and declared, “I don’t have to be nice anymore.” Towards the end of his speech, Trump presented an optimistic forecast on COVID-19 saying the U.S. was “rounding the corner.”

The enthusiasm for the president’s re-election was palpable as shown in the following video as supporters race to get as close to the stage as possible:

We are one movement, one people, one family, and one glorious nation under God! pic.twitter.com/6uSKxB6GZn

The president capped off his swing-state blitz with a rally in southern Nevada where he was joined by UFC President Dana White and MMA stars Colby Covington, Justin Gathje, and Henry Cejudo. “The radical left in America is waging open war on law enforcement,” Trump declared following the heinous shooting of two police officers in California. “If Biden wins, the mob wins,” he warned. The president argued that he saved millions of lives by closing off travel from China in late January and rebuked Democrats for their inaction.

All in all, President Trump appeared to be in fine-form with an air of confidence and a mostly well-organized campaign message emphasizing jobs, law & order, and patriotism. Meanwhile, his opponent Joe Biden continues to make embarrassing gaffes nearly every time he gives a speech in public. He is currently under fire after a campaign spokesperson refused to answer the question of whether or not Biden has used a teleprompter to answer questions.