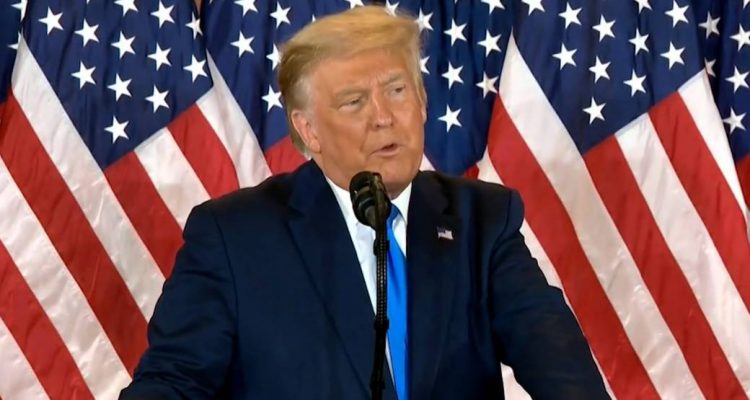 While the Electoral College has voted to give Joe Biden the keys to the White House for the next four years, one nuanced pathway to victory remains for President Trump and it goes directly through the Republican-controlled legislatures in four key swing states.

Trump’s legal team made waves in recent weeks as they asked these governing bodies to “take back” their constitutional authority to choose their slate of electors for Congress to certify on January 6, 2020.

While none have to date, it is not unprecedented and doing so would trigger a contested election in which Congress would make the final call. We wrote about this previously when there was a small chance of a tie in the Electoral College and how this process would certainly give the president the advantage.

The Pennsylvania, Georgia, Wisconsin, and Arizona legislatures are all under full control of the Republican Party in both the State House and the State Senate. If voters apply enough pressure over the next few weeks, it is possible that they could send their own slate of electors which means the states will have sent “dual electors.”

Sending dual electors from those four states would bring Joe Biden under the required threshold of 270 to win and trigger a contested election in which the U.S. House would decide the next President. As the Constitution dictates, each state would get one vote which more than erases the Democrat Party’s majority in the House.

With a united Republican Party, President Trump would win re-election by a vote of 27 to 23. This is the only way the president can win a second consecutive term at this point unless the Supreme Court decides that new evidence is compelling enough to re-involve themselves.

The political fallout of “overruling the voters” would be palpable and the entire media would come crashing down on Republican legislators. The counter-argument is, of course, that the election was not free, fair, or transparent so sending the state-result-binded slate is actually overruling the voters.

If you live in PA, GA, WI, or AZ – Call, write, and email your state legislators today! If you don’t – send this article to someone who does! Use the below language if you’d like or edit.

“I’m contacting you today asking you to do everything in your power to take back your constitutional authority over our state electors before January 6 and send a dual slate of electors so that this election will not be stolen. I cannot support anyone who fails to do this.”

If you do not know who your state legislators are, look them up through the links below:
Pennsylvania: https://www.legis.state.pa.us/cfdocs/legis/home/findyourlegislator/
Georgia: http://www.senate.ga.gov/senators/en-US/FindyourLegislator.aspx
Wisconsin: https://maps.legis.wisconsin.gov
Arizona: https://www.azleg.gov/findmylegislator/

No Comments on "Trump’s One Remaining Path To Victory"