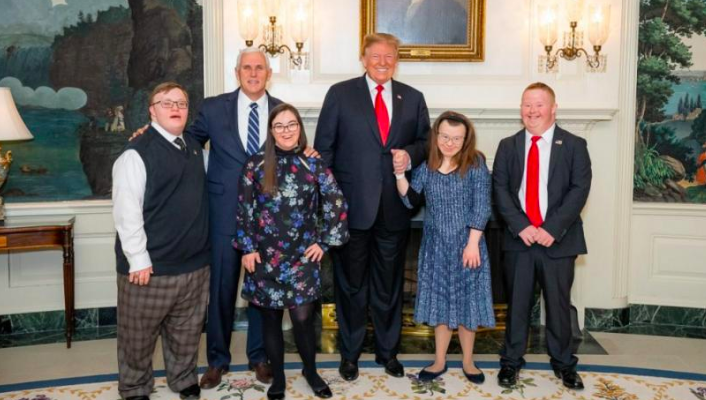 President Trump and Vice President Pence recently welcomed athletes from the Special Olympics and other individuals with Down Syndrome to the White House to celebrate World Down Syndrome Day.

“Sadly there remain too many people – both in the United States and throughout the world – that still see Down syndrome as an excuse to ignore or discard human life. This sentiment is and will always be tragically misguided. We must always be vigilant in defending and promoting the unique and special gifts of all citizens in need. We should not tolerate any discrimination against them, as all people have inherent dignity.”

The visit of the Special Olympics at the White House came after the US team competed in the World Games. President Trump expressed the nation’s gratitude saying,

“This is special for me and special for the First Lady because this is the Special Olympics. And we have a lot of the great Champions here. They won, and they came in a couple of seconds and a couple of thirds, but a lot of first places. And we (the USA) did fantastically well. What you’ve done is incredible. Bringing home all those medals!”

Miranda Mendoza, a Special Olympics athlete from New Jersey said, “Being in the White House was awesome. Meeting the President, the Vice President and the First Lady and the Second Lady has been an honor. This day changed my life like you wouldn’t even imagine. I’m thankful the President invited a group of people from Special Olympics USA as well as myself to be recognized for our achievements in Abu Dhabi!”

President Trump announced that the Second Lady would represent our government and our country at future Special Olympics events. Second Lady Pence thanked him adding that, “This is probably the highest honor I will ever have as Second Lady.”

“I know our athletes are absolutely thrilled to be here. We create an environment every single day in Special Olympics so that our athletes can be the very best they can be. We create an environment so that the rest of the world can understand their abilities, courage, strength and their determination, and so that they will be more accepting and we can build a more inclusive community and world!”