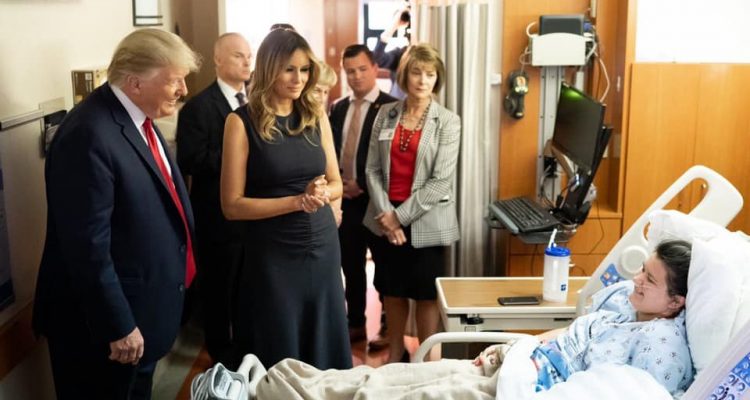 President Trump took time this week to visit the survivors of the recent mass shootings in El Paso, Texas, and Dayton, Ohio before publicly calling for reforms in the nation’s gun laws.

White House Press Secretary Stephanie Grisham said the President and First Lady were, “received very warmly by not just victims and their families, but by the many members of medical staff who lined the hallways to meet them. It was a moving visit for all involved.”

Not all were welcoming as was the case for an El Paso resident who told the Washington Post that, “We believe it is an insult that the president is coming here.”

“Leaving El Paso for the White House. What GREAT people I met there and in Dayton, Ohio. The Fake News worked overtime trying to disparage me and the two trips, but it just didn’t work. The love, respect & enthusiasm were there for all to see. They have been through so much. Sad!”

Just this morning, the President pivoted to supporting gun reform when he tweeted,

“Serious discussions are taking place between House and Senate leadership on meaningful Background Checks. I have also been speaking to the NRA, and others, so that their very strong views can be fully represented and respected. Guns should not be placed in the hands of mentally ill or deranged people. I am the biggest Second Amendment person there is, but we all must work together for the good and safety of our Country. Common sense things can be done that are good for everyone!”

The hot-button issue of gun control has once again taken over the national dialogue which happens after most mass shootings. If continued, such statements are likely to cost Trump support among his ultra-conservative base but his gains among moderates could make it a beneficial political move.