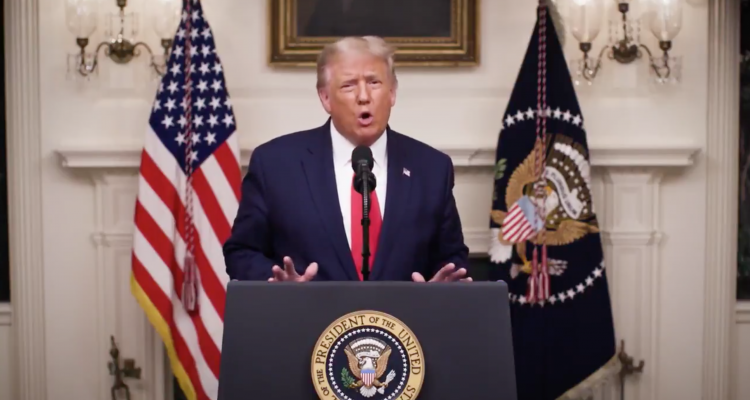 In his keynote address to the National Catholic Prayer Breakfast, President Trump announced that he will be signing an executive order aimed at protecting the rights of “born-alive” babies.

President Trump proclaimed, “I will always protect the vital role of religion and prayer in American society… I will always defend the sacred right to life.” He also announced an increase in funding for neonatal research.

“Today, I am announcing that I will be signing the Born Alive Executive Order to ensure that all precious babies born alive, no matter their circumstances, receive the medical care that they deserve. This is our sacrosanct moral duty.” the president declared.

“In American public discourse, perhaps no concept is more misunderstood than the notion of separation of church and state… Militant secularists have long seized on that slogan as a facile justification for attempting to drive religion from the public square, and to exclude religious people from bringing a religious perspective to bear from conversations about the common good,” Trump explained.

Attorney General William Barr was honored during the event with the 2020 Christifideles Laici Award for ““fidelity to the church, exemplary selfless and steadfast service in the Lord’s vineyard.”

In accepting the award General Barr proclaimed, “As Washington and his fellow founders understood, religion is at the heart of the American experiment in self-government.”

“The consequences of this hollowing out of religion have been predictably dire. Over the past 50 years, we have seen striking increases in urban violence, drug abuse and broken families. Problems like these have fed the rise of an ever more powerful central government,” Barr explained.

The controversy surrounding life-saving care for pre-born or born-alive abortion victims made headlines last year when every U.S. Senator running for president on the Democrat side voted against the Born-Alive Abortion Survivors Protection Act. This included current vice presidential nominee Kamala Harris of California.

At the time, President Trump chastised Democrats in a scathing tweet saying, “The Democrat position on abortion is now so extreme that they don’t mind executing babies AFTER birth.