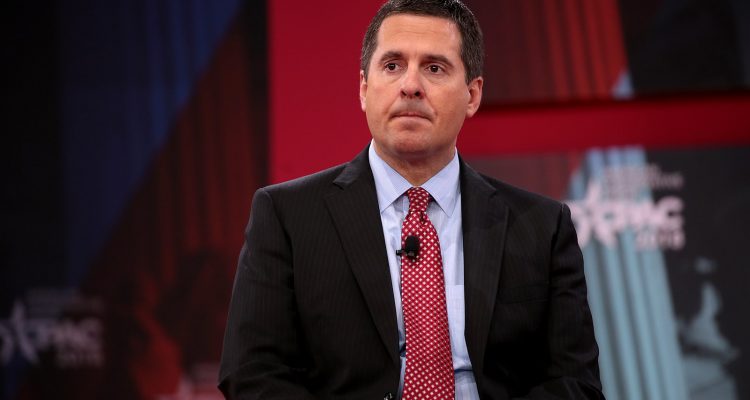 Representative Nunes will be recognized for his bravery and determination in uncovering the government misconduct surrounding the “Russia collusion” hoax and related spying activities.

“In 2017, Congressman Nunes launched an investigation into the Obama-Biden administration’s misconduct during the 2016 election – and began to unearth the crime of the century. As a result of his work, he discovered that the infamous Steele Dossier was funded by the Clinton campaign and the Democratic National Committee. He found that a senior Justice Department attorney was married to one of the architects of the document. He learned that the Obama-Biden administration had issued Foreign Intelligence Surveillance Act (FISA) warrants to spy on President Trump’s campaign and illegitimately unmasked several innocent spying victims for political gain.

Devin Nunes’ courageous actions helped thwart a plot to take down a sitting United States president. Devin’s efforts led to the firing, demotion, or resignation of over a dozen FBI and DOJ employees. He also forced the disclosure of documents that proved that a corrupt senior FBI official pursued a vindictive persecution of General Michael Flynn — even after rank and file FBI agents found no evidence of wrongdoing.

Congressman Nunes pursued the Russia Hoax at great personal risk and never stopped standing up for the truth. He had the fortitude to take on the media, the FBI, the Intelligence Community, the Democrat Party, foreign spies, and the full power of the Deep State. Devin paid a price for his courage. The media smeared him and liberal activists opened a frivolous and unjustified ethics investigation, dragging his name through the mud for eight long months. Two dozen members of his family received threatening phone calls – including his 98 year old grandmother.

Congressman Devin Nunes is a public servant of unmatched talent, unassailable integrity, and unwavering resolve. He uncovered the greatest scandal in American history.”

The timeline of Representative Nunes’ acts of courage can be seen in the documentary The Plot Against the President which Amazon Prime subscribers can watch for free. It is based on the book by Lee Smith entitled, The Plot Against the President: The True Story of How Congressman Devin Nunes Uncovered the Biggest Political Scandal in U. S. History.

No Comments on "Trump to Award Rep. Devin Nunes the Presidential Medal of Freedom"