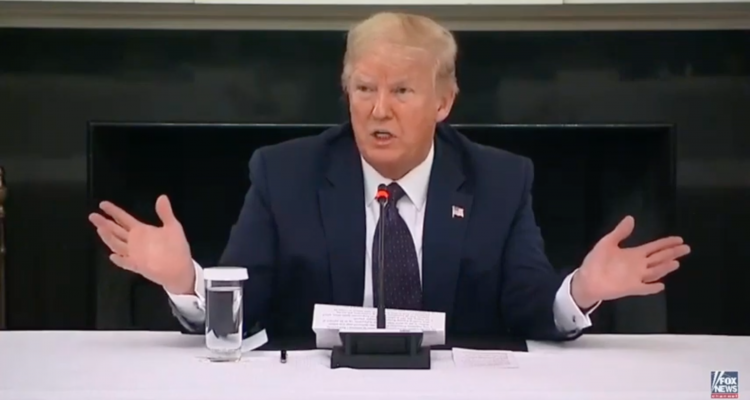 President Trump stunned reporters at a press conference on Monday, telling them that they’d be surprised at how many people are taking hydroxychloroquine and zinc as a prophylactic.

“The frontline workers– many are actually taking it– I happen to be taking it,” the president said as you can almost hear reporters’ jaws hitting the floor as Trump revealed that he’s been taking the anti-malarial drug as a way to protect himself from COVID-19.

The reason for their shocked reaction is because the mainstream media has seemingly disavowed hydroxychloroquine as a legitimate treatment for coronavirus despite the FDA’s emergency approval for that use.

In fact, much of the media has gone as far as to warning of the dangers of the medication which appear to be minimal, something President Trump reiterated.

The president said that he believes “people ought to be allowed” to take the medication if they wish. He added that he received a letter from a New York doctor who told him that he hasn’t lost a single patient, asking him to continue “pressing” for the COVID-19 treatment.

Trump explained that he asked the White House doctor if he could take it to which he said he could. To those that suspect a financial motive for his advocacy of the drug he said, “I want the people of this nation to feel good, I don’t want them to be sick.”

The president jokes, “I was just waiting to see your eyes light up when I said this… I’ve taken it for a week and a half now and I’m still here, I’m still here.”

The 45th President received criticism last week for saying that coronavirus will go away with or without a vaccine. Trump also called for opening the country on Monday morning tweeting simply, “REOPEN OUR COUNTRY!”

See the media’s response for yourself below:

I watched the powerful testimony last night of Dr. Stella Immanuel who stood at the...More

No Comments on "Trump Stuns Reporters, Tells Them He’s Been Taking Hydroxychloroquine (VIDEO)"