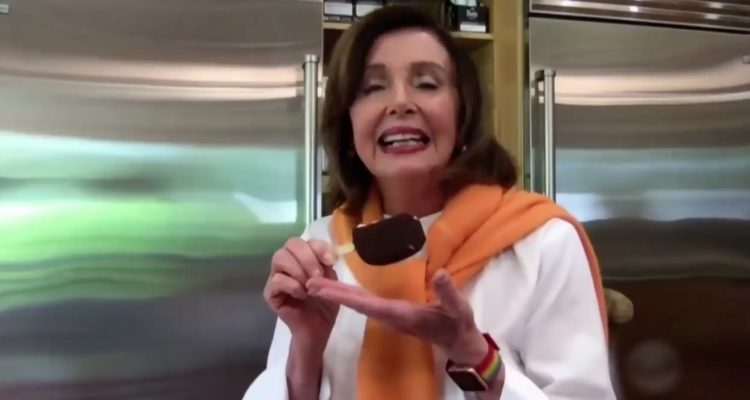 Donald J. Trump for President, Inc. has released a new campaign ad calling out House Speaker Nancy Pelosi (D-CA) for holding up the Paycheck Protection Program while showing off her collection of chocolates and gourmet ice cream.

The 75-second clip is pretty powerful and effectively communicates how out of touch Pelosi seems to be with the average American family.

The video ad compares Nancy Pelosi to Marie Antoinette, the last Queen of France who was overthrown and put to death after famously coining the phrase “Let them eat cake” in response to reports that her people had run out of bread.

The California Democrat did an interview with late night talk show host James Corden last week. The optics were awful as she sat in front of two massive industrial-sized refrigerators in her lavish California mansion while millions of Americans are struggling to make ends meet.

As if the optics weren’t bad enough, Pelosi has been blocking the renewal of the popular Paycheck Protection Program which provides funding for small businesses to retain employees during the economic shutdown.

It wasn’t just any ice cream – it was gourmet ice cream that goes for a whopping $13 per pint. The blistering attack ad switches back and forth between footage of Americans in need and Pelosi’s interview.

Pelosi explained her love for ice cream in the interview saying, “I like it better than anything else… I don’t know what I would have done if ice cream were not invented, I just wonder.”

It is a lesson in the art of presentation, or lack thereof, which is surprising from a career politician like Nancy Pelosi who should have known better. But she didn’t, probably because she is as out of touch as the campaign ad indicates she is.

President Trump has been especially energized in his recent criticisms of the House Speaker, predicting her demise in a recent tweet writing,

“Nervous Nancy is an inherently “dumb” person. She wasted all of her time on the Impeachment Hoax. She will be overthrown, either by inside or out, just like her last time as “Speaker”. Wallace & @FoxNews are on a bad path, watch!”

Watch the hit piece for yourself:

One vote, that is how many Republicans were persuaded to support the “HEROES” Act which...More

If you are skeptical of House Speaker Nancy Pelosi and the mainstream media claims that...More