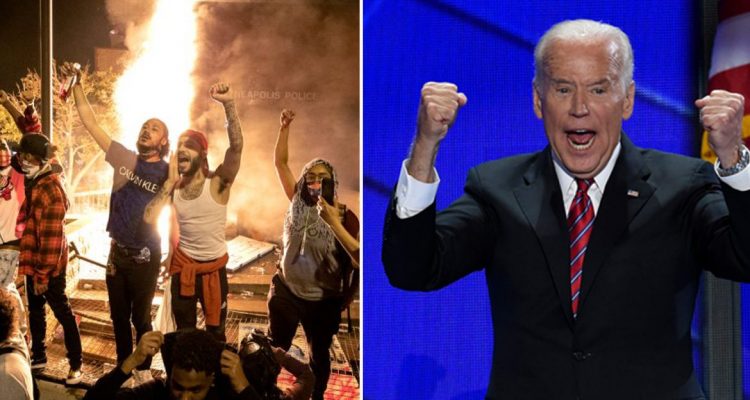 The Trump campaign has released two new ads hitting Joe Biden and Kamala Harris on what is perceived to be two major weaknesses: rioting and China.

Despite more than three months of violent riots sweeping several U.S. cities, Democrats were stunningly silent on the issue until very recently.

As we reported, national Democrats and most of the mainstream media made a noticeable pivot last week from ignoring the violence and emphasizing “peaceful protests” to denouncing violence from all sides and blaming President Trump for fanning the flames of civil unrest.

The Democrat ticket’s decision to ignore the violence committed by Antifa and BLM activists opened the line of attack that the Trump campaign highlights effectively in a well-produced 1-minute attack ad that plays like a trailer for the next “Purge” movie sequel.

The video contains frightening footage from several riots including a flaming, decapitated head of a pig. The production concludes with Vice President Mike Pence saying, “You won’t be safe in Joe Biden’s America” as the words “stop Joe Biden and his rioters” appears while Kamala Harris laughs in the background.

The Trump campaign even made two variations of this ad tailored to the swing-states of Minnesota and Wisconsin which contain two cities at the heart of civil unrest: Minneapolis and Kenosha.

Trump’s China-based criticism of his opponent is nothing new but what is new is that recent intelligence reports have indicated that China wants Joe Biden to win the election and the Trump campaign puts that inconvenient fact front-and-center in the following 30-second spot.

The race has definitely swung in President Trump’s direction over the past few weeks which is corroborated by improved polling numbers, both nationally and in swing-states, as well as betting odds.

Republicans are accusing Democrats of coordinating a vicious attack against the president to blunt his momentum by alleging that the president said disparaging things about fallen soldiers. The allegations which the media claimed were from “anonymous sources” were soundly debunked by the White House over the weekend with more than a dozen sources.