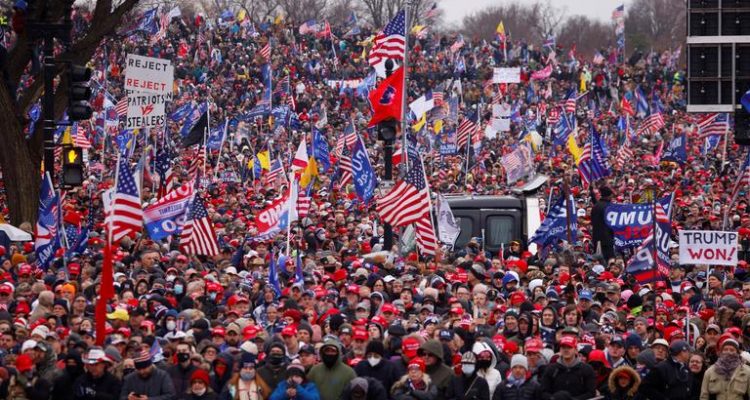 Shortly after a joint session of Congress began the process of certifying the Electoral College from the 2020 Presidential Election, chaos erupted at the Capitol building.

President Trump called for peace after thousands of supporters from the “Save America” Rally marched to Congress, where a small number of unidentified protestors stormed into the halls of Congress after breaking through four security barriers. The 45th president tweeted, “Please support our Capitol Police and Law Enforcement. They are truly on the side of our Country. Stay peaceful!”

Congress called a recess to the joint session of Congress as the Capitol buildings were placed on lockdown and law enforcement attempt to restore order.

The videos below show protesters clashing with police at the steps of Congress before the capitol building was breached as law enforcement found themselves overwhelmed by the swelling crowd.

Tensions are high in D.C. amid the #ElectoralCollege vote. https://t.co/RXcgdidaXs

This is wrong and not who we are. Be peaceful and use your 1st Amendment rights, but don’t start acting like the other side. We have a country to save and this doesn’t help anyone. https://t.co/3oUAPxuwi9

Shocking scenes in D.C. show Trump supporters smashing windows and breaking inside the Capitol building, which is on lockdown. The Mayor has announced an emergency curfew. pic.twitter.com/LIc2qMIlqp

Rioters have broken into the Capitol building and are fighting law enforcement. Video by @ElijahSchaffer: pic.twitter.com/vfafgJU6YX

A photo has emerged showing some of the marchers have made their way to the House floor:

2021 is off to a great start pic.twitter.com/XnzinPYQ9U

A woman was shot in the neck by law enforcement and 1,100 National Guard have been deployed.

Republican National Committeewoman Ronna McDaniel rebuked the rebellion tweeting, What these violent protesters are doing is the opposite of patriotism.

“It is shameful and I condemn it in the strongest possible terms. Anyone who thinks they are helping the country by participating in this is wrong, and you should listen to the brave men and women in law enforcement and leave the Capitol.”

The president has now issued a second call for peace tweeting, I am asking for everyone at the U.S. Capitol to remain peaceful. No violence! Remember, WE are the Party of Law & Order – respect the Law and our great men and women in Blue. Thank you!

Barely on week into the new year, hopes for a less divided country have quickly evaporated as the path forward remains unclear.

Update: President Trump made a call to the people inside the Capitol building to “Go home and go home in peace.”