From Giancarlo Sopo, a writer for The Blaze, is an article showing how top Democrat leaders are attempting to de-legitimize the outcome of the next Presidential election in 2020.

Both House Intelligence Committee Chairman Adam Schiff (D-Calif.) and House Judiciary Committee Chairman Jerry Nadler (D-N.Y.) appeared Sunday morning on ABC’s “This Week” with George Stephanopoulos. During the interview, both Schiff and Nadler implied that next year’s election might already be “corrupted” by President Trump and his campaign.

Stephanopoulos asked for Schiff’s reaction to the news that Rudy Guiliani having been in Ukraine recently to investigate Hunter Biden’s business dealings. It is a legal practice and standard for political campaigns to do opposition research of their opponents. Schiff’s comment to this was describing Guiliani’s trip as a “threat to our election’s integrity.” Schiff also added that the Trump campaign’s opposition research represents “a clear and present danger, I think, to our democracy and not something we can turn away from simply because the Republicans in the House refuse to do their duty and continue to put the person of the president above their constitutional obligation.” Schiff continued his spin on the campaign by also accusing both Trump and Guiliani of conducting a sham investigation and trying to cheat in the next election.

Nadler’s responded by agreeing with Schiff’s characterization. He told Stephanopoulos that the Trump campaign’s research into Biden represents “a total threat” to the 2020 election. “This is a crime in progress against the Constitution and against American democracy,” he said. “We cannot take the risk that the next election will be corrupted through foreign interference solicited by the president, which he’s clearly trying to do.” 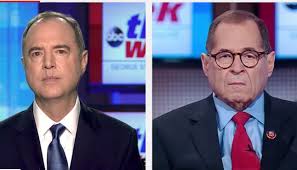 No Comments on "Top Democrats Are Now Trying To De-Legitimize The 2020 Election, Say It Has Already Been ‘Corrupted’"