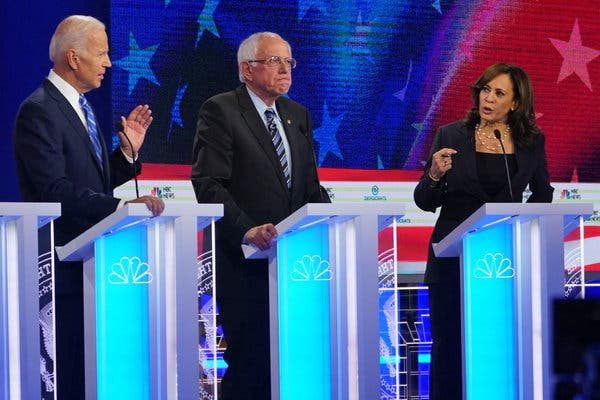 This week Americans got their first glimpse of what a Democrat in the White House would look like and it was a pretty scary sight, but also entertaining at times.

Because of the vast number of candidates, the crowd of twenty presidential hopefuls was divided “randomly” into two groups of ten to debate on back-to-back evenings.

These candidates “drew the short stick”, missing out on the opportunity to share the stage with Democrat frontrunners Joe Biden and Bernie Sanders.

Warren forced herself into having more time than anyone else and avoided making any gaffes like.. speaking in Spanish.

O’Rourke inexplicably began answering a question in Spanish only for Cory Booker and Julian Castro to follow suit, actions that appeared gimmick-ey to many viewers.

The best moment of the night was when the lights went out and the entire stage went black due to “technical difficulties”. MSNBC went to commercial only to be “trolled” by President Trump with this hilarious video:

Kamala viciously went after Joe Biden on his civil rights record or lack thereof and promised to take executive action on a multitude of issues. “Mayor Pete” was articulate, invoking his military service and seemingly never stumbled over his words.

The former Vice President appeared his age and saw no breakthrough moments but was the target of countless attacks. Bernie admitted that he will raise taxes on the middle class.

One of the only agreeable quotes came from former Colorado Governor John Hickenloooper:

“You don’t need big government to do big things.”

No Comments on "The Winners And Losers From The Democrat Debate"