Here’s what you need to know.

“The Iraqi government must work to end the presence of any foreign troops on Iraqi soil and prohibit them from using its land, air space or water for any reason,” it said.

Of course, the problem is that Iran has already infiltrated and taken over Iraqi soil in their government, so this is a bit disingenuous. If Iraq wanted to get rid of the United States- AND IRAN I think President Trump would jump at the opportunity. He hates being over there. He just wants to get reimbursed for the airport we built.

But this is an Iranian occupied Iraq talking.

HOW DID THIS EVER HAPPEN?
How did we get here after 4500 American deaths and 2 trillion dollars spent?

Two things:
1.) It’s the ongoing Sunni vs. Shia, Hatfields, and McCoy’s conflict. Iran is Shia as is the majority of the Iraqi parliament. When it came time to vote on this resolution it was boycotted by Sunni and Kurd members of the government. It’s a bit like democratic impeachment in the House. This isn’t the entire nation talking. It’s pro-Iran Shia officials talking.

2.) The geniuses in the deep State Department convinced us to remove Sadaam Hussein, who was Sunni. When we kicked out all Sadaam’s Sunni Baathist party members it turned them against us and opened a door for Shia Iran.

Then ISIS came along, made up of – you guessed it… mostly Sunni militants. Their brand of terror was so bad Al-Qaeda was apologizing for them. Iran (Shia) once again was the all too willing answer and a new pro-Iran Iraqi militia formed. (Which is so strange when you remember that Iraq and Iran were at war earlier in that same life.)

PRESIDENT OBAMA’S BIG ADVENTURE
At the same time, President Obama put his consummate skills to work (after creating a vacuum for ISIS and letting it run free.) Iran (and Soleimani) took full advantage of Obama’s naive wooing of Iranian goodwill, happily accepting 150 billion dollars (frozen assets–long story) to ease the power of economic sanctions. Not only that but the money fed Soleimani’s terror infrastructure in Yemen, Lebanon, Syria, and Iraq. All they had to do was agree to delay interest in a nuclear bomb. Something we could not fully verify.

Meanwhile, our intelligence branches were fully aware of the painstaking exertions made by Iranian spies to co-opt the countries leaders, pay Iraqi agents working for the Americans to switch sides, and infiltrate every aspect of Iraq’s political, economic, and religious life. It started before Obama came into office.

All this information was leaked to the press in 2017 but U.S. News was more interested in Stormy Daniels and Russia and Ukraine than Iraq and Iran. So we missed Iraqi protesters marching in the streets, demanding an end to corruption and calling for the ouster of the Iran loyalist prime minister. Iraq was old news.

Iran wants the U.S. out so they can fully take over Iraq, and build a unified influence from Iran through Iraq to Syria and Lebanon (where they fund 40,000 Hezbollah fighters) on the doorstep into Israel. Both Iran and Turkey want this caliphate. Fortunate for the world that 80% of Turkey is…Sunni and Iran is Shia.

HE WARNED THEM
Trump knew how bad an actor Soleimani was. He is credited with being the architect behind 17% of American deaths in the region. For this reason, Trump warned him not to hurt an American. They killed an American and crossed the red line. Then in a moment of hubris, Soleimani and his Iraqi commander made the mistake of meeting in Iraq to coordinate attacks on U.S. targets. They would have never been hit in Iran.

Not convinced? Soleimani was so evil even Adam Schiff even agreed with the President about taking him out. (That’s gotta be really bad).

Ironically, he was blown up on the very road where he tapped into his spy network to place IEDs to blow up young Americans.

IRAN NOW KNOWS – TRUMP IS NOT OBAMA
Iranian militants are mad. They’re stirred up like ANTIFA at a Trump Inauguration. They put an $80 million dollar bounty on Trump’s head. They have picked out 35 U.S. targets.
They say they now have every right to build that nuclear bomb.

But Trump won’t be bullied and he won’t let a danger like this go unaddressed.

WELCOME TO 2020!
I remain convinced, God is in control and is using Donald Trump in a manner necessitated by the evil at work. God is using him to preempt something worse that was in the works. “Thus says the Lord to Cyrus, whose right hand I have held – to subdue nations before him and to loose the belts of kings” (Translated- “undo the military capacity of his adversaries.”) (Isa 45:2)

Pray. And when you hit moments like this assume God is actually hearing those prayers and acting.
– Pray for a supernatural calm and wisdom for the Commander In Chief.
– Pray for providential intervention and intelligence breaks for Pompeo and the White House.
– Pray for unusual unity in the military and defense departments.
– Pray that the mischievous mouths and activist networks that rise in media be silenced.
– Pray for, and not against Iran.
– Pray that the Iranian people be free from the suppression of the existing government and for peace and freedom.

Martyr’s blood has been shed in Iraq, Lebanon, Syria, and Iran. Christians have been driven out in staggering numbers. Obama moved those fleeing Christians to the back and Trump moved them to the front. May God have mercy on this President and may a fresh wave of salvation be poured out upon Iran and Iraq. 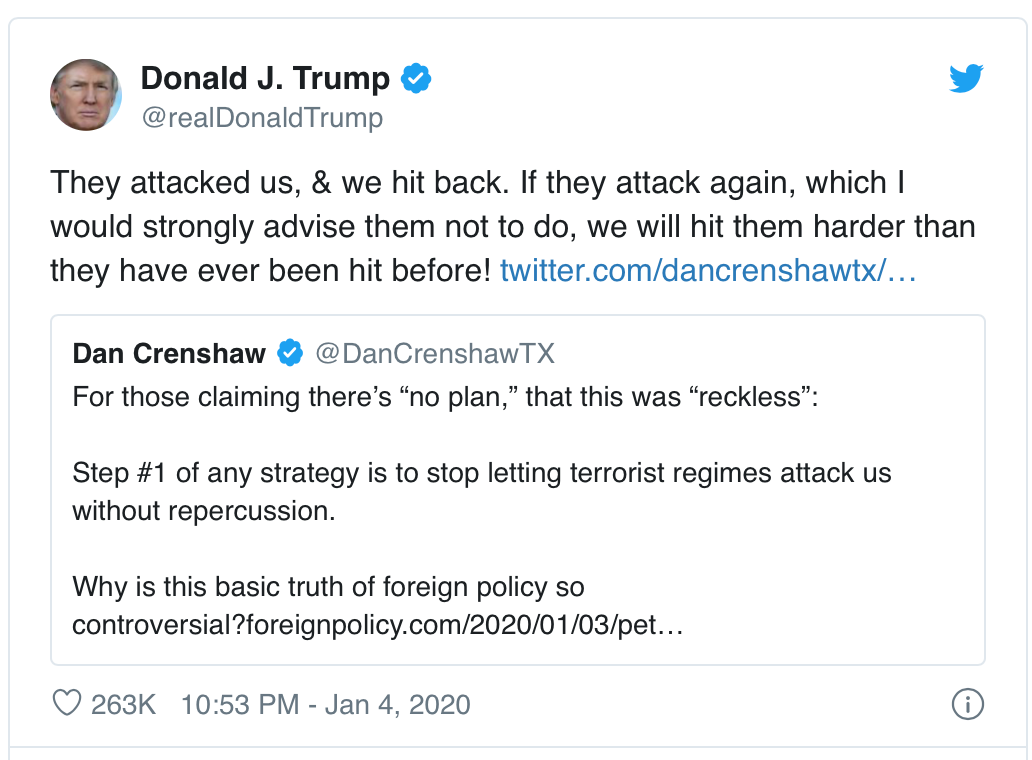 No Comments on "The U.S. Kicked out of Iraq?"