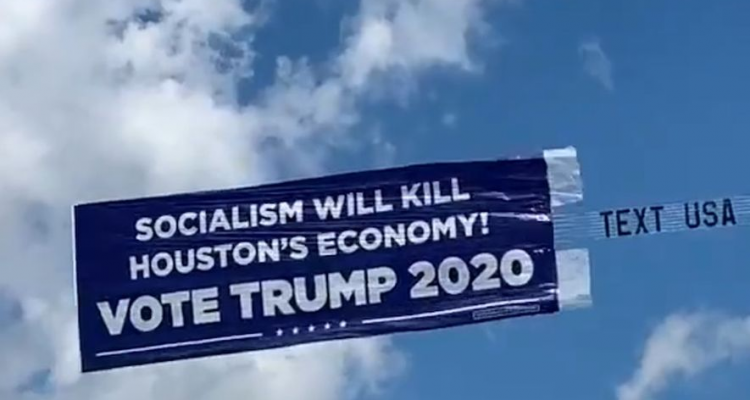 Last night all eyes were turned to the third Democratic debate being held in Houston, Texas and was the first time Joe Biden, Elizabeth Warren and Bernie Sanders faced off on stage.

The Trump Campaign, not wanting to be outdone, decided on an unusual move to swing attention back to the President’s own re-election campaign. While the event was ongoing, a plane took to the skies with an aerial ad blasting the Democrats and their socialist leanings, while encouraging voters to vote Trump in 2020.

Maybe the sight of the ad was what made Joe Biden mistakenly call Bernie Sanders ‘the President’. I mean it’s an easy mistake to make, right? As the Party’s biggest socialist bar the squad has Joe already mentally thrown in the towel and decided that if a Democrat is going to occupy the White House in 2020 it’s guaranteed to be Sanders? Only time will tell but by all appearances, the Trump campaign had the last laugh.

No Comments on "Team Trump Trolls Dems With Aerial Attack"