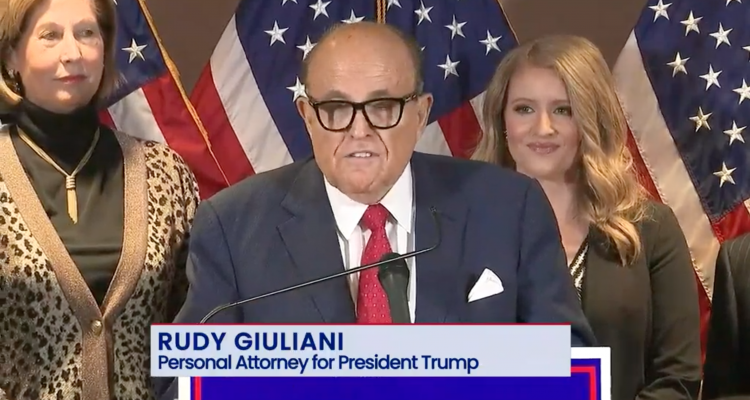 America is even more divided than before the election as the results continue to be called into question due to allegations of widespread voter fraud including from the sitting President of the United States.

Up until recently, claims of voter fraud were limited to the unprecedented and ill-advised policy of mail-in voting expansion across thirty states. However, the integrity of the voting machines themselves is now being called into question by some big names.

“In Georgia, Pennsylvania, Michigan, Wisconsin, Nevada, and Arizona – we more than double the number of votes needed to overturn the election in terms of provable, illegal ballots,” Giuliani announced.

“President Trump won by a landslide, we are going to prove it and we are going to reclaim the United States of America for the people who vote for freedom,” Powell declared.

Powell alleges that an algorithm was used to calculate the number of votes that Biden needed to win before “votes were shifted by this software,” referring to Smartmatic and Dominion.

She also joined Glenn Beck’s radio program today and accused another company which was reportedly raided in Germany saying, “The servers from Scytl were confiscated the other day. I’m hearing it was our forces that got those servers. So I think the government is now working on an investigation of what really happened.

The corporate media has demonstrated absolutely no journalistic curiosity in the matter despite mounting evidence and alarming allegations as they continue to refer to Joe Biden as “President-Elect.”

President Trump says the election was “rigged” and has repeatedly argued that he was the winner if you only count “legal votes.” One thing is for certain, Trump grew his support by more than 10 million votes since 2016 and received more than any other sitting president.

New public opinion research indicates that nearly 80 percent of Republicans believe the election was “not fair.” The Supreme Court of the United States will likely make the final call.

No Comments on "Sidney Powell: “President Trump won by a landslide, we’re going to prove it”"