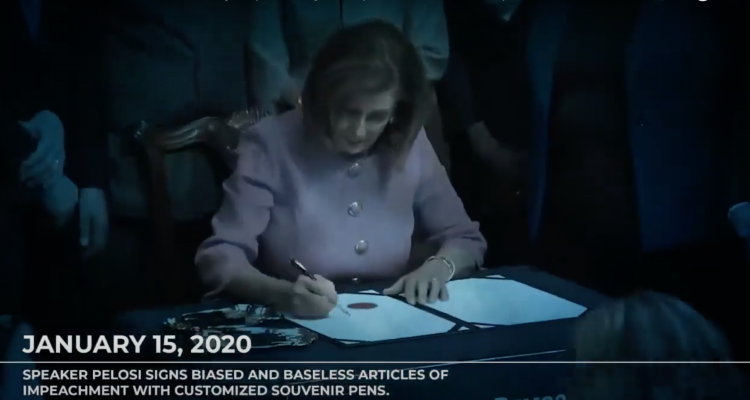 The high-quality production blasts Democrat leaders in Congress for wasting valuable time on the partisan impeachment trial of President Trump when they should have been helping him prepare for COVID-19.

The timeline begins on December 8, 2019 when the first COVID-19 case was reported in China. Ten days later, Democrats in the House of Representatives voted to impeach President Trump.

On December 30, Doctors and healthcare workers in China began trying to warn the world of a SARS-like illness spreading only to be censored and punished by the Chinese Communist Party.

On January 14, the World Health Organization promoted Chinese propaganda by telling the world that there was “no evidence of human-to-human transmission. Cruz calls the WHO a “puppet” of Communist China.

The very next day, House Speaker Nancy Pelosi (D-CA) delivered the articles of impeachment to the U.S. Senate. The first U.S. COVID-19 case was confirmed less than a week later.

On January 23, the “House Managers” began their oral arguments in the Senate. On January 31, President Trump took decisive action to ban Chinese travelers, except U.S. citizens, from entering the United States which Joe Biden called a symptom of his “xenophobia.”

In his State of the Union Address on February 4, which Pelosi ripped up, President Trump pledges to protect Americans from the coronavirus outbreak as the impeachment charade continued.

Senator Cruz ends the video with some of his own comments at the time:

“The games the Democrats are playing on this are ridiculous. The partisan games they are playing are having very real consequences across the Country.”

I found the hard-hitting video too good not to share, see it for yourself below:

Ted Cruz: “Did the virus escape accidentally from a Chinese lab?”

US Senator Ted Cruz (R-TX) has self-quarantined himself in his Texas home after coming in...More