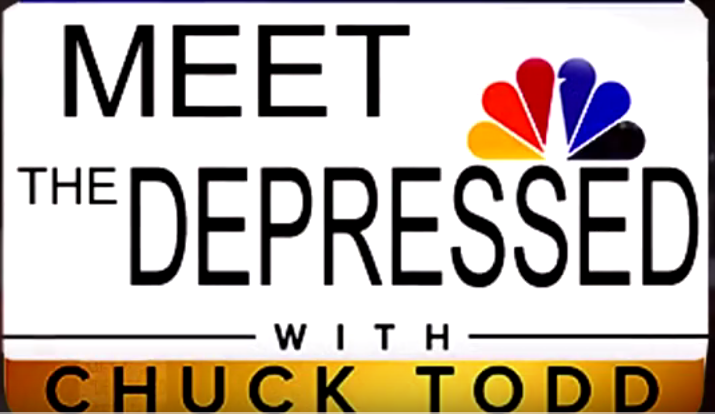 Did you see Sundays broadcast of MEET THE DEPRESSED? Dang, they love mocking Christians. Pass along this counter-punch. It’s long on purpose. Only 10% of the people on social media will read it all so I posted this for them. It’s a transcript from a radio show I got access to. Here goes…

“Chuck Todd is the host of the NBC show Meet the Depressed. It airs on Sunday morning. There’s a daily version of Meet the Press. Now, I have shared with you in the past that I have now the firm belief that many journalists who say that they’re in the news business or in the media are… I’m trying to find a soft word. I’m not trying to be insulting. I’m trying to be descriptive. I think they’re really uneducated.”

I think they don’t know half what they think they know, and this lack of knowledge is accompanied by an arrogance and a condescension to everybody that gives the impression that they think they know everything and you don’t know anything. I don’t think they’ve been well educated. I think their education has been stunted and limited. It’s not been broad-based, and it reaches so far as many of them not even understanding the basics of the foundation of this country. They don’t understand the Constitution.
Every damn one of them needs to take the course “Introduction to the Constitution” authored by Hillsdale College. I offer as evidence for this Chuck Todd at NBC. Now, these people hate Roy Moore. They hate him to begin with because he’s Christian. He used to be a judge in Alabama. He won the Senate Republican primary election over Luther Strange, and Judge Roy Moore is the judge that was involved in the Ten Commandments controversy in the Alabama courthouse. He wanted them displayed — and, of course, the culture war effort by the left to wipe and erase any reference to Christianity was well underway at the time.
So he became a scourge, he became hated — and because he was white and Christian, he became a racist, sexist, bigot, homophobic homophobe. So F. Chuck Todd was describing Roy Moore, who they instinctively don’t like because they think he’s a white zealot and a KKK guy. Chuck Todd led off yesterday’s edition of the daily version of Meet the Press with the assertion that Roy Moore “doesn’t believe in the Constitution as it’s written.” Now, this is a profound insult to anybody who is in government, judge, politics, to say that he doesn’t understand the Constitution.

Chuck Todd started by touting the election as “a purge of the GOP Establishment,” Roy Moore winning and Luther Strange losing. He called it “a crisis of confidence in Mitch McConnell, a weakened president who’s now scrubbing his Twitter feed and the political earthquake in Alabama underneath it all.” Then he started jabbing at Roy Moore as a Christian conservative. He said, “But that doesn’t even begin to describe who the guy really is and he could very well be your next senator. If you don’t understand just how freaked out some folks in the GOP and the White House are about what that means, then you don’t know Roy Moore.

After the Roy Moore sound bite, Chuck Todd said, “That’s just a taste of what are very fundamentalist views that have gotten him removed from office twice as Alabama chief justice.” What Roy Moore said is absolutely spot on and correct. Our rights don’t come from government. They don’t come from the Bill of Rights. They come from Almighty God. The view of the Founding Fathers — and you would know this if you’d been educated on it. I’m convinced Chuck Todd is uneducated on the Constitution, or maybe ill-educated.

He’s probably been taught the wrong thing about it. The founders of this country saw rights as inalienable — meaning natural, God-given, not something given by man. We are all “endowed by our Creator with certain unalienable rights, among them life, liberty, and the pursuit of happiness.” That’s in the Preamble of the Declaration of Independence that 56 brave people signed, and that began the process of establishing an independent United States. The Declaration sets out the belief that we are all created by God, our creator — and with that creation, we are born with rights. They do indeed come from God.

The founders believed that the only thing government would do would be to try to take them away from you or limit them. So they wrote a Constitution that limited what government could do — and Chuck Todd of NBC doesn’t have the slightest idea! When he hears somebody properly reference the source of human rights, he thinks the guy is a conservative wacko Christian fanatic, “because he doesn’t know that rights come from government!” And I dare say Chuck Todd’s not alone. I’d say virtually every other journalist of his generation probably thinks something similar.

The First Amendment doesn’t say government grants us all the right to say what we want except for these circumstances. That’s what the left wants to be able to do. They want to be able to limit speech. And right now, the speech that many leftists want to eliminate is conservative speech, Republican speech, however you want to look at it. They think it ought not be permitted. They think government ought to have the power to punish people that say things leftists don’t want to hear.

Chuck Todd thinks that’s probably a good idea. Chuck Todd doesn’t know that that’s unconstitutional. Or at least he indicates here he doesn’t know that it is. But he’s not alone, as I say. I saw something the other day again that not even a third of the American people can name the three branches of government. They have no idea. Executive, legislative, judicial, no idea. They think the three branches of government are House, Senate, Supreme Court. If they get even that close.
So why would they understand the source of rights? It’s easy to understand if you’re taught. But because teaching it requires mentioning God, the left will have none of it. Can’t have God in the classroom. Can’t have God in the public square. Can’t have a nativity scene out there, can’t do that. And so anybody who does and wants God in a public square is a Nazi, white supremacist, KKK fantastic as far as the average, ordinary leftist of today thinks. And many of those average, ordinary leftists and their thinking are populating the Drive-By Media.

And that’s why I say they’re dumb or they’re uneducated or they’re ignorant or what have you, but it’s dangerously so in their case. I mean, I can understand not liking Roy Moore. Nothing says they have to. Nothing says they have to respect him. But to not understand something as basic and elementary as government does not grant rights. Government writes laws. But it does not grant rights. But you hear people throw the word “right” around. “I have a right to that chewing gum. I have a right to whatever I want. That is a right, if I want it, I have a right.”
That’s what people think of rights. Rights are what they want. Rights are what they don’t want. I have a right not to hear what you’re saying. No, that’s not the right. Everybody has a right to free speech, but there isn’t a single person that has to listen to you. But the left thinks that the right to free speech means you cannot not listen to them. You must listen to, and you can’t disagree. That’s what the First Amendment means to them.

How many times have you heard a leftist say just recently they think the Constitution prohibits hate speech? Somebody’s teaching this. “Yeah, you can’t just go out and say hateful things to people. Constitution says so.” Their professors are teaching them this. If the almighty government assist you can’t say it, why, there is no other authority you need to cite. The almighty government says you can’t say hate speech. There’s no such proscription.

You have been reading a brilliant transcript of el Rushbo Limbaugh. A legendary talk radio weapon of mass instruction. (And possible Ninja sheep.)

Boldness is the Fruit of Courage – Arise Freedom Fighters!

Rick Joyner shares a word regarding boldness as a fruit of courage. He also covers...More

“Congress shall make no law respecting an establishment of religion, or prohibiting the free exercise...More

Prepare for Victory! 2019 will Bring a Great Surge of Power and Momentum