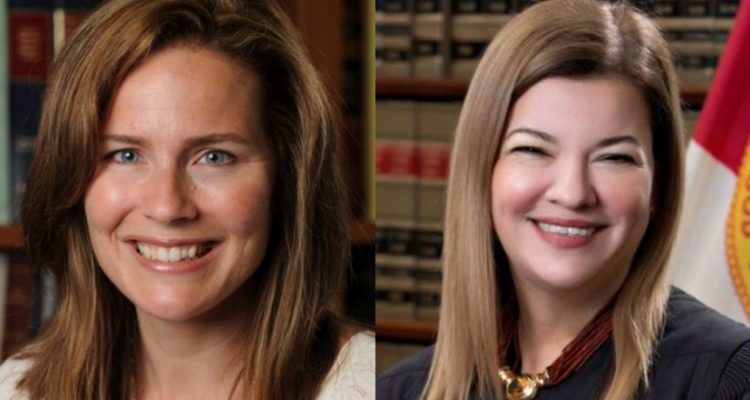 Supreme Court Justice Ruth Bader Ginsburg (RBG) passed away Friday night due to complications from metastatic pancreatic cancer at the age of 87. She was the second woman to be appointed to the Supreme Court.

Almost immediately, the political implications of her passing overshadowed her death as Democrats panicked and Republicans anticipated a new, more conservative replacement.

The president has stated that his nominee “will be a woman” and, based on the list of potential justices he previously released, will either be Amy Coney Barrett of Louisiana or Barbara Lagoa of Florida.

Democrat leaders quickly demanded that the appointment be postponed until after the election while Republicans asserted it is their duty to act swiftly. Democrat presidential nominee Joe Biden read a written statement to reporters saying in part:

President Trump wrote a statement on Saturday reading, “.@GOP We were put in this position of power and importance to make decisions for the people who so proudly elected us, the most important of which has long been considered to be the selection of United States Supreme Court Justices. We have this obligation, without delay!”

Of course, members of the U.S. Senate are the only ones with a direct say in the matter and thanks to former Senate Majority Leader Harry Reid, what once took 60 votes to confirm a justice was lowered to a simple 51-vote majority.

Thus began a rhetorical tug-of-war between the two major parties with Democrats alleging hypocrisy by Republicans who blocked then-President Obama’s nomination of Merrick Garland ahead of the 2016 election. However, that argument is a double-edged sword because the flip-side of that coin is that Democrat leaders pushed for confirmation.

Senator Ted Cruz (R-TX) went on ABC over the weekend where he explained that the key difference between then and now is that the same party that controls the White House also controls the Senate as opposed to the republican-held Senate that Obama faced after the mid-terms. He also argued what may be the strongest case for filling the seat, a potential legal challenge over the 2020 election results that would require a fully-staffed Supreme Court.

Senate Majority Leader Mitch McConnell (R-KY) announced the president’s nominee will receive a vote. Then there’s the math to make it to the magic number of 50. I say 50 and not 51 because Vice President Mike Pence can break a tie. There are 53 republican senators. So far, Trump-critics Lisa Murkowski (R-AK) and Susan Collins (R-ME) are the only republicans to dissent. Mitt Romney (R-UT) is a likely third defector.

The 45th president will likely get his third nominee to the Supreme Court confirmed, either before or after the election, giving him more appointments to the Nation’s highest court than any president since Ronald Reagan.