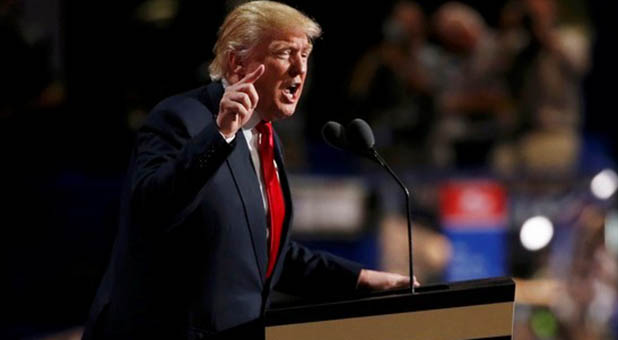 This is part one of three.

The man sitting across from me at lunch represents the gold standard of evangelical believers in Texas. We were discussing his future. He is retiring from a huge corporation where he oversees a $3 billion budget. As our conversation turned to politics, he surprised me. His voice lowered as he leaned toward me, sharing how much he wrestled over the moral conflict of voting for either candidate, Hillary or Trump. “I wanted to tell you,” he confided, “I was not sure what I would do till I heard you speak about Cyrus and Trump. As I heard what you said, I had peace.” Read this and let it minister to you.

The media assault on Trump is unprecedented. Political analyst Pat Caddell says, “This is the crisis of democracy—the mainstream media, which is in the tank in the most violent way against Donald Trump, and for Hillary Clinton, that I have ever seen in the 45 years that I have been at the top of presidential politics.”

Caddell added, “And it is terrifying … Not just that they’re for Hillary, and telling us that Trump is evil, and my God, no human being could possibly vote for him; it is what they are omitting, the facts that they will not tell the American people.”

Let my account provide an alternative viewpoint. I am thankful to Steve Strang for the courage to publish this potentially controversial piece. First, I am not after the role of Trump apologist. He is not a perfect man or a flawless candidate. I don’t know how he can compensate for so deeply alienating the Cruzes and Kasichs and Bushes, whose help and infrastructure he needs. Which leads to my second point: Without a grass roots mobilization of believers to get out those who never voted before, it’s hard to see how he can overcome the Clinton machine and hit the numbers he needs.

In spite of all that, I believe I’ve heard God.

You have to wonder: What is it about this man, Trump, that unhinges liberals, media, academia and the establishment class in politics? This is more than an issue of personal style. There is a spiritual storm surrounding this election. Those who see Donald as a hateful, unstable, shallow, blusterous billionaire need to consider whether they are responding to the man and what he actually says or reacting to a caricature of the man. Barak Obama deliberately ran as a blank canvas that voters could paint on to make him become what they wanted him to be. Trump is the opposite. He is in some strange way a mirror that reflects back whatever you are. Some people “get” him and others don’t, and those who don’t never will. But if he is a mirror, what does it tell us about the American left when they burn our flag, smash police vehicles and unleash violence and invective against peaceful gatherers at Trump events?

There is a spirit assigned to destroy America. The strategy is laid bare if you read the 51-page democratic platform. It’s the manifesto Hillary is expected to enforce when she is president. They call this revolution a “reset!” Read it for yourself. Under Hillary, America will undergo the final phase of Obama’s radical socialist cultural transformation with astonishing speed. Just one man stands in its path.

When I first heard Donald Trump speak, he was returning from a trip to Iowa where he met “evangelicals.” Asked what he thought about them he replied, “Well, they’re interesting.” He sounded like he had encountered a rare bird species never seen in Manhattan.

With 15 candidates running, and many of them strong Christians, it didn’t seem likely that Mr. Trump, the business man outsider, would go very far. But I heard the Lord say something: “Donald Trump is a wrecking ball to the spirit of political correctness.” That was the first word I heard about him. Immediately I began to wonder what God was doing. How far will Trump go? Could this odd man out be the unpredictable instrument of God for a nation entering what authors of The Fourth Turning call “the crucible,” a cycle of American history where we are put to the ultimate test?

When I heard the words, “Donald Trump is a wrecking ball to the spirit of political correctness,” I sensed that this man was about to break up the narrative driving the nation. Few people remember where we all were when he showed up. The media was highlighting gender change with Kaitlin Jenner, burning cities in Ferguson, and safe places on campuses. The terms homophobia and islamophobia were being attached like a scarlet letter on anyone who had concerns or convictions out of sync with popular opinion. No politicians were talking about borders.

While evangelicals were walking on eggshells, Trump took over the conversation and dominated it ever since. Unlike any candidate in electoral history, Trump has shaken up the establishment in media and politics. Until Trump arrived, a handful of insiders held the undisputed power to prop one contender up or take an unruly voice down. As media found out, they can only break you if they make you. They didn’t make Donald.

Wrestling With God on the Way to New York

As I traveled to Trump Towers I wondered, how far will this wrecking ball go? Why would God choose Trump when so many true conservatives and Christians were already running? Is he an interruption to God’s plan or is the battle for America changing in a way we haven’t caught up with?

We’ve been losing the culture war decisively for the last decade, largely because we never knew how it was fought in the first place. Christians (30-50 million) represent a sufficient number in America to impact the nation. Why do we fail?

I’ve researched this topic for 20 years and keep coming back to a conclusion my colleagues and I don’t like: Culture isn’t shaped the way we thought. We assumed that culture is a reflection of the values of the majority of the people. If you can turn the majority, you can tip the culture. Or so we thought. The truth is that culture is shaped by relatively few people, a remnant of elites in proximity to power. This is why you can’t evangelize a nation into transformation. Christians already outnumber other groups but keep losing influence. To put it in Christian terms, culture is shaped by a remnant of gatekeepers who sit at the culture-shaping gates of influence. This powerful elite is made up of dense overlapping networks located and largely concentrated in the coastal cities (think the Northeast and California) and distributed among the peak institutions of government, law, academia, journalism, banking and entertainment—institutions that touch us all. It’s a revolutionary distinction. Revival ignites from the bottom up, but cultural reformation solidifies from the top down. You must occupy the gates!

Christians by and large are not concentrated in these heights. This explains why a remnant in the progressive left has succeeded so radically since President Obama came to power. Just as Jesus said, the people of this world are shrewder in dealing with their own kind than are the people of the light (Luke 16:8). Put simply, evangelicals and charismatics are a large but disjointed group. We don’t work together and we don’t occupy key “gates” in the high places of opinion shaping.

In spite of this, Trump sees this group as critically important.

So why is he a threat? By putting America first and building a people movement, Donald Trump becomes a wild card that messes up the elite globalists’ insider game. Whatever you bow to on the way up the mountain controls you at the top. Hillary Clinton comes to the top of the political mountain with 1,000 strings (attached to 30,000 missing emails). Donald Trump comes with none. This is why the lawless Left and establishment Republicans don’t trust him. He’s not tied into the system.