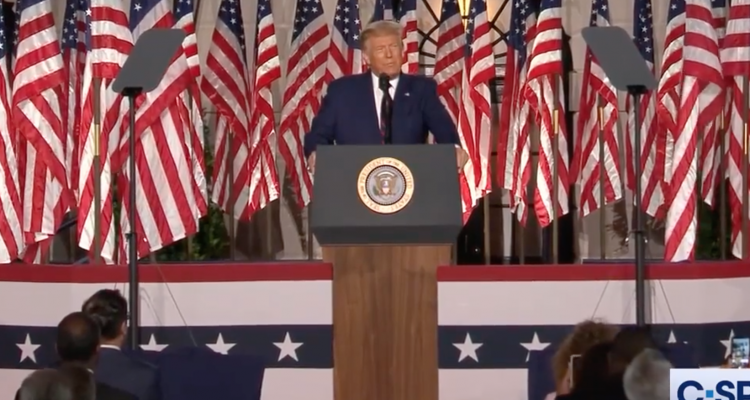 President Donald Trump did not disappoint on the fourth and final night of the 2020 Republican National Convention (RNC), giving a rousing speech on the front lawn of the White House which culminated in one of the largest fireworks displays I have ever seen.

The 45th president was joined by his family and a large crowd of 1,500 seated supporters as he accepted the Republican nomination for President of the United States.

“My fellow Americans, tonight with a heart full of gratitude and boundless optimism, I profoundly accept this nomination for President of the United States,” Trump said. “In a new term as president, we will again build the greatest economy in history, quickly returning to full employment, soaring incomes and record prosperity.”

President Trump conveyed a message of unity as he made the case for defending traditional American values and history in the face of leftist extremism.

“This is the most important election in the history of our country,” Trump declared. “At no time before have voters faced a clearer choice between the parties, two visions, two philosophies or two agendas. This election will decide whether we save the American dream or whether we allow a socialist agenda to demolish our cherished destiny.”

Speaking of his opponent the president posed an interesting question, “At the Democrat National Convention, Joe Biden and his party repeatedly assailed America as a land of racial, economic and social injustice. So tonight I ask you a simple question: How can the Democrat Party ask to lead our country when it spends so much time tearing down our country?”

The God-centered theme of the RNC continued into Trump’s oration as he said, “Our opponents say that redemption for you can only come from giving power to them. This is a tired anthem spoken by every repressive movement throughout history. But in this country, we don’t look to career politicians for salvation. In America, we don’t turn to government to restore our souls; we put our faith in almighty God.”

Even as an incumbent, the President presented himself as a political outsider saying, “Together we have ended the rule of the failed political class, and they are desperate to get their power back by any means necessary. You’ve seen that. They are angry at me because, instead of putting them first, I very simply said America first.”

He warned of Joe Biden’s support for late-term abortion and of his proposals to shut down the economy again, enforce a national mask mandate, and pass more than $4 trillion in new taxes.

A major theme of the president’s speech was American greatness as he touted our historic accomplishments as he pledged to prove our nation worthy of that legacy by reaching and soaring to new heights over the next four years.

The 70-minute speech is the second longest acceptance speech by a presidential nominee of either major party since 1984, only exceeded by his own speech in 2016 which was 5-minutes longer.

Joe Biden’s acceptance speech last week at the Democrat National Convention lasted just 24 minutes, the shortest of a presidential nominee of either party since 1984.


Watch the historic presentation for yourself below:

President Donald Trump: "My fellow Americans, tonight with a heart full of gratitude and boundless optimism, I profoundly accept this nomination for President of the United States." https://cs.pn/3iZkIgr

Viewers tuning in for the first day of the 2020 Republican National Convention were in...More

The Trump campaign issued the following press release on Sunday which provides a complete list...More