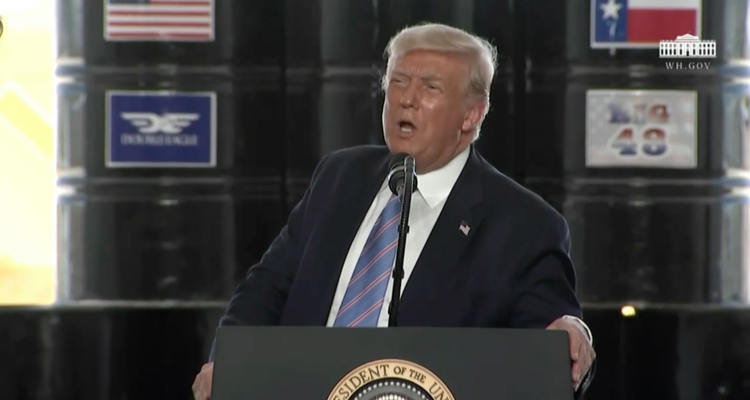 President Trump landed in Midland, Texas Wednesday morning aboard Air Force One as the Lone Star State has become a key to victory in the 2020 election.

The president touted energy jobs and said U.S. oil production has more than doubled since his taking office before railing against Joe Biden and “crazy Democrats” who he said would decimate the entire energy sector in pursuit of their ‘green’ agenda.

The 45th president proclaimed the U.S. military to be “the strongest it’s ever been” and thanked the U.S. Senators, Ted Cruz and John Cornyn, for their leadership in the Senate.

Trump also highlighted his executive action this week to rescind a housing regulation to prevent new construction of low-income housing in the suburbs, a topic that has become a hot-button issue for local communities in recent years.

The most recent presidential election poll of likely voters out of Texas shows the president with a slim 2-point lead over Joe Biden which has caused both campaigns to shift gears.

Republicans are unlikely to lose Texas as it has been won by every Republican candidate for president since Ronald Reagan but, as Democrats chip away at what was once an insurmountable fundraising deficit, the expense of playing defense could give Democrats an advantage elsewhere.

One other variable that could affect the Texas vote is the recent election of former Congressman Allen West as the Chairman of the Republican Party of Texas. West campaigned on an aggressive marketing strategy both statewide and nationally.

Texas Republicans are optimistic that West’s public profile and earned media opportunities will translate into increased fundraising and party involvement.

Chairman West sent out a fundraising email this morning in which he pledged to fight Democrats “tooth and nail” and called Joe Biden “a truly despicable and blatantly racist individual.” He signs off with the slogan: “Texas GOP – We are the STORM.”