Newsmax: In response to President Trump’s decision to cancel the June 12, 2018 summit with North Korea, Secretary of State Mike Pompeo said on Thursday he hoped Pyongyang and Washington will be able to resume talks on dismantling Pyongyang’s nuclear program but the decision was ultimately up to North Korean leader Kim Jong Un. 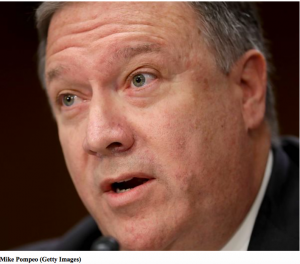 Trump announced his abrupt withdrawal from the summit in a letter to Kim on Thursday and called it a “missed opportunity.”

Pompeo read the letter aloud at the start of testimony to the committee, saying it was a disappointing development although “frankly not a surprise.” Pompeo said Trump had made the decision himself to withdraw after meetings on Wednesday in which he concluded that the summit would not be successful.

No Comments on "Pompeo: Hope NKorea Talks Can Resume | Newsmax"