It’s Time To Face Facts. The Migrant Caravan Is Really An Illegal Invasion

Let’s not beat around the bush here. What we have all seen on the news, and on the daily talk shows isn’t a migrant caravan, not really. It’s a modern day invasion by people from a foreign nation. People who are already showing their contempt for US law by attempting to come here illegally. Yes, some may well try to claim asylum, but the vast majority will fall short of the requirements needed to be considered for or given asylum. Coming from a poor, high crime country isn’t enough. Europe has already suffered from untold damage due to illegal migration, it’s going to be hard work to make sure the same does not happen in the US over the coming months.

In Europe, for a long time, it has been accepted as customary that any asylum seeker should apply for asylum at the first ‘safe’ country they reach. This isn’t the case for South America, as the US and Mexico have yet to reach a safe third country agreement, which would be needed to make this work. Republican Senators Chuck Grassley and Mike Lee have appealed to Department of Homeland Security head Kirstjen Nielsen to set this up, so the migrants would have to claim asylum in Mexico.

According to judicial watch, The images that have been reaching our televisions are far from the truth. They’ve reported from the Guatemalan-Honduran border last week and observed that the images of desperate women and children fleeing their violent home nations in search of a better life is ‘hardly accurate.’ They’ve said that there are gang members, groups of angry young men across a variety of nationalities; Africans, Bangladeshis, Sri Lankans, and Indians. 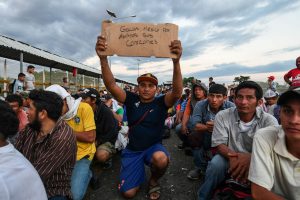 One of the men questioned by their reporters contradicted the media reports we’ve all heard – that the migrants are fleeing war and violence, that they are frightened and are just trying to get to safety.

“We’re not scared,” he said as others around him nodded their agreement. “We’re going to the United States to get jobs.” Another man when asked said, “We need money and food.”

Guatemalan Intelligence Officials confirmed that the caravan contains a “multitude of Special Interest Aliens (SIA) from the countries listed above as well as other criminal elements and gang members.”

Interestingly, a fact not being reported in most of the media is that a “Special Interest Alien” is a specific term used by DHS and ICE to mean a foreign national originating from a country identified as having possible or established links to terrorism.

Earlier in October the Guatemalan President, Jimmy Morales, announced the arrest and deportation of 100 people who were “highly linked to terrorist groups, specifically ISIS.” Is it so hard to imagine that if 100 were caught and deported, that some of those SIA’s that Guatemala’s intelligence officials were warning of are in this vast mass of people heading right now to the border?

Can’t They Request Asylum In Mexico?

Yes, they can. The stark reality is that they don’t want to. Mexican President Enrique Pena Nieto announced the “you are at home” plan, wherein the migrants would be offered shelter, schooling, medical attention, and benefits in Chiapas and Oaxaca if they applied. That plan was rejected on Friday however, with them refusing to accept anything less than safe passage to the US border.

But Why Would They Turn Down Asylum?

Unfortunately, it’s down to welfare shopping, pure and simple. The Organisation for Economic Co-operation and Development (OECD), tracks various economic progress indicators for the 36 countries that make up its members, including the USA and Mexico. 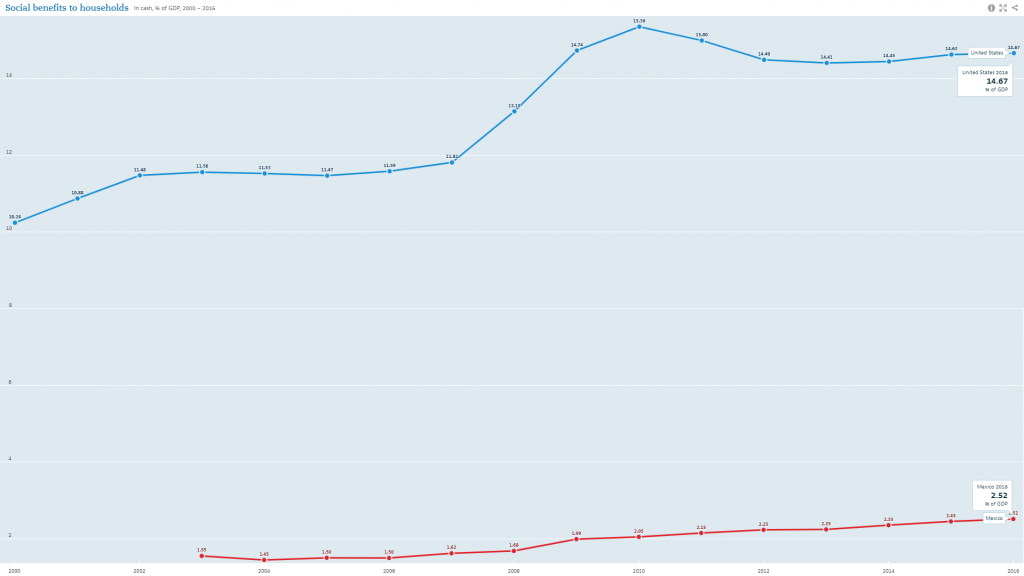 It’s a big difference, isn’t it? 14% of 18 trillion dollars, or 2.5% of 1 trillion dollars. The migrants know this too, which is why they are forcing their way forward to Mexico city and the border even though they have been offered to stay in Mexico.

President Trump has been crystal clear on what his stance is on this invasion force. 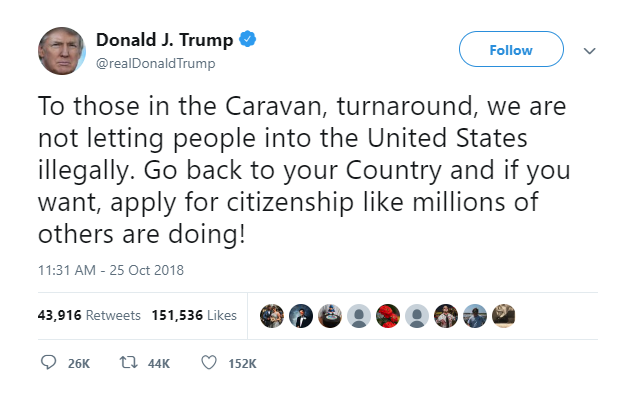 So why are they still coming even though the President has said time and again that he is now sending troops to the border and they will not be allowed into the United States? The answer is simple.

They’re Relying on Weaponizing Your Compassion

Three years ago, on a beach in Turkey, a tiny body washed up on the shore at Bodrum. It was the body of a three-year-old boy called Alan Kurdi, who had been killed in an illegal crossing from Turkey to the Greek island of Kos, that had gone tragically wrong.

The photos of that little boy shocked Europe, and they made worldwide headlines. Those same photos were responsible for a considerable change in attitude and policy towards illegal migrants across the continent.

Now think about the things you’ve heard out of Europe three yours on. Does it sound like this influx of illegal migrants has made Europe a better, safer place? No. The fact of the matter is, at the time that little Alan was in the news it was widely reported that his family were refugees and they were fleeing ISIS in Siria. That wasn’t true.

The family was indeed from Syria. They had already moved to Turkey once; then when ISIS were driven out, they went back home. When ISIS resurged in Syria a second time, they moved to Turkey once more and applied for refugee status in Vancouver, Canada. Canada refused that refugee application, however, because they had already made it to Turkey and were not in imminent danger. Turkey was considered safe enough for them to be which prevented them from claiming refugee status in Canada.

So why were they making the crossing at all? Why was his father not culpable or held responsible and tried for his un-necessary death? Why was he not sent to jail? Because the population of Europe had their compassion turned against them for someone else’s political agenda.

So What Happens Next?

We saw what happened next in the case of Alan Kurdi. All blame was put on the heads of Europe – how could they allow this to happen? The media should have been asking questions like ‘why these parents had endangered a child by putting him on a barely seaworthy dinghy, to make an illegal border crossing when they were already safe’? Instead, they were busy whipping segments of the public up into a hysterical mob to the extent that they voted against their own interest.

You need only look at California to see what I mean, talk about voting against your own interest? California has the highest tax rates, escalating crime, a huge homelessness issue and some of the worst public school systems. Yet in August you had the current Lieutenant Governor of California, Gavin Newsom (Dem), make this suggestion to the left-leaning podcast, “Pod Save America.”

“I did universal health care when I was mayor, fully implemented, regardless of pre-existing condition, ability to pay, and regardless of your immigration status. I’d like to see that extended to the rest of the state. San Francisco is the only universal health-care plan for all undocumented residents in America.”

So there you are, you already have people on the inside who are happily aiding and abetting illegal immigration, as it helps them politically.

What do you think will happen when CNN, MSNBC, The New York Times, HuffPost, etc. all start broadcasting and posting images of armed military officials at the US-Mexico border going pushing back women and children?

My guess? The same thing will start to happen here, as happened in Europe in 2015. Mass hysteria, segments of the population whipped up (who can forget “concentration camps for babies” being screamed all over Twitter back in June?) all the while those same people will forget that when all is said and done, those people are trying to enter our country illegally.

What Can Be Done?

President Trump has tried to tighten up immigration laws since he was elected. He’s posted about it several times on Twitter. 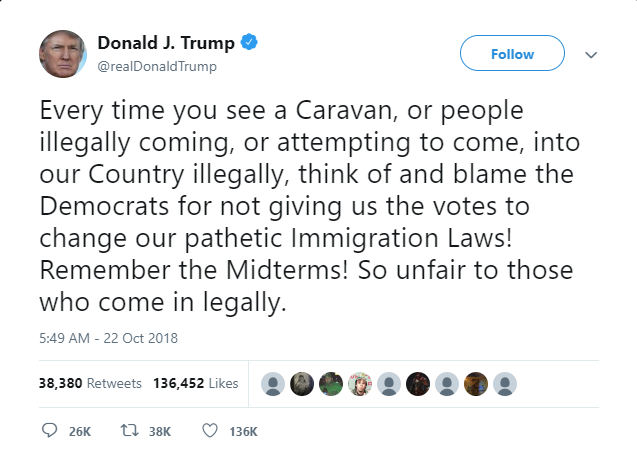 It may well be that the sheer size of the caravan and the growing number of Americans will see the situation as it is – that these are not refugees but illegal migrants who are attempting to flout the rules to win the welfare lottery.

Other than the President’s efforts to keep the border secure, what else can you do if you believe as he does? Well, you can educate yourself on the facts for one and educate other people on them too.

With the midterms coming up, America will truly get to decide who they want to be, even with this looming crisis. Let’s make sure that we don’t make the same mistake as Europe by allowing our compassion to become a weapon for ill.

US Military Redirects Billions For Wall, Mexico Cuts Illegal Crossings By Half

According to a press release on behalf of the Western Wall Heritage Foundation, President Alvarado...More

WHAT’S REALLY GOING ON AT THE BORDER (I live in TEXAS)!

WHAT DEMOCRATS ARE DOING IN TEXAS If the Soros funded anarchy machine can keep the...More

No Comments on "Opinion: The Truth About The Migrant Caravan"