The Federalist: The New Yorker recently published an article against the Christian owned restaurant Chick-fil-A for opening a location in New York City. The liberal magazine’s response to the restaurant’s opening could almost be viewed as a sort of journalistic version of the left-ist “snowflake”. Writer John Ehrett for The Federalist, offers his own take on The New Yorker’s meltdown over a chicken sandwich to the Big Apple. 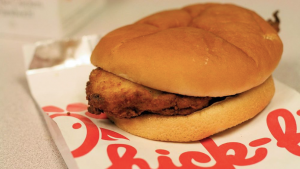 According to Piepenbring’s screed, which lacks content beyond Ewww-These-People-Aren’t-Like-Me, Chick-fil-A’s arrival in the Big Apple “raises questions about what we expect from our fast food, and to what extent a corporation can join a community.” Evidently, Piepenbring can’t understand why the restaurant is so popular with NYC residents, given the city’s progressive political and social leanings. How can this be? Chick-fil-A is a pleasant environment because its employees are friendly and respectful and its facilities are spotless. Also, for what it’s worth, when pressed about perceived “anti-LGBT” stances, the restaurant focused its donations elsewhere. So, by any sensible standard, Chick-fil-A should be a model company for any progressive interested in workers’ rights and community reinvestment. What more could Chick-fil-A do to be one of the “good guys”?

Source: New Yorker To Christians: We Don’t Want Your Kind Around Here | The Federalist

There's something I've been hearing again and again about President Trump and the way he...More

In the past few days, Chick-fil-A has come under fire, yet again. In an interview...More

Join me on the Truth and Liberty broadcast with Andrew Wommack and Richard Harris as...More

1 Comment on "New Yorker To Christians: We Don’t Want Your Kind Around Here | The Federalist"