Winston Tseng, A New York City Street artist, has caused outrage by putting up posters claiming to be from the NYC sanitation department, which mocks both Christians and Trump supporters. Initially, when people first saw the signs, the Sanitation Department was inundated with requests to confirm if their department was responsible.

In a statement on Twitter, the DSNY stated “these were not created or issued by the Department of sanitation, and we do not condone unlawful defacement of city litter baskets. We are investigating this act of vandalism”.

The first poster depicts a woman wearing a MAGA hat, with pearl earrings and matching necklace, clutching a Bible. The text above the lady says “keep NYC trash free”. The second poster shows a rather slovenly dressed man in a MAGA hat, with a Confederate tattoo, clutching a Chick-fil-A cup. Again the caption above the man says “keep NYC trash free”. 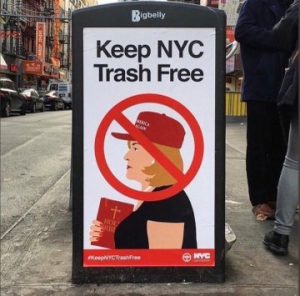 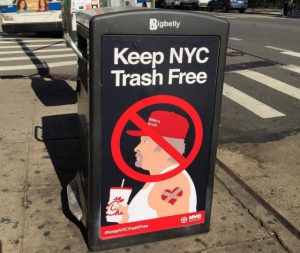 The artist responsible, Winston Tseng, told the online publication brooklynstreetart.com when they asked about calling people ‘trash’ that “I wouldn’t say it’s meant to represent all Caucasians but certainly they are meant to portray a certain demographic. In this case a segment of white people that I personally believe the posters accurately reflect. The statistics are there that a lot of Trump supporters who wear the MAGA hats come from red states, from the south, and are Christian evangelicals. Those are the concepts that I included on these posters. I didn’t make that up. I’m just reflecting something that is a quantifiable fact.”

He also went on to say “the source of the issue is the segment of America who supports him and authorizes him to make the decisions that he makes I’m not sure if he believes strongly in them or if he is just pandering and just wants to win a popularity contest amongst certain demographics.”

So if you’re in the market for a new piece of art and are either a supporter of the president or a Christian, Winston Tseng may not be the artist for you