FOX News Insider: At a local Townhall event, a small business owner challenged Nancy Pelosi regarding her remarks earlier this year calling the tax cuts “crumbs”. Later on she was confronted again, this time by a Georgetown law student who asked her about the actual evidence of Trump colluding with Russia during the 2016 campaign. 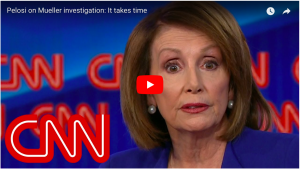 She continued to defend her remarks after a small business owner told her he gave $1,000 bonuses and 5 percent raises to his workers. “This certainly was not crumbs,” he said.  Pelosi commended the man, but said he was a “rarity” and that most businesses had not taken similar steps.

“If Trump actually colluded with the Russians, why isn’t he found guilty of it after a year of investigation? Wouldn’t there be some type of concrete proof by now?” Joshua Gonzalez asked.

She answered that the probe by Special Counsel Robert Mueller “takes time” and that Americans “wouldn’t have any idea what’s going on” with respect to what Mueller has found.