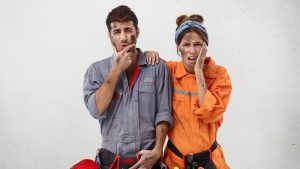 Mike Rowe, known for the “Dirty Jobs” series he did has as great following on social media. His newest project is one where he’s offering scholarships for schooling in the tradesmen area, but, it requires one to have of all things, a work ethic! One mother wrote to Mike after discovering the shocking “small print”, or as her son told her when he wanted to sign up, he learned he was required to sign what’s called the, S.W.E.A.T. Pledge. What?! The scholarship program ISN’T “FREE”?

Here’s an excerpt:
A woman tells her son to apply for Rowe’s work ethic scholarship. Then she reads it actually requires her son to have a work ethic. Horrific. Obviously, this is Mike Rowe’s fault. And not her failure.

Mr. Rowe – I heard about your “work ethic scholarship program,” and suggested my son apply. He wants to be a welder! I was appalled though, when he showed me your “sweat pledge,” and told me that signing it was required of all applicants!! Where did you come up with this nonsense? There are so many things wrong with this document I don’t even know where to begin!! Suffice it to say, we will not be applying!!!

No Comments on "Mike Rowe Attacked Over ‘Work Ethic’ Scholarship"