Lou Engle shares how he has had several prophetic dreams concerning the LGBTQ community. He also shares how one of his dreams is coming to pass and an upcoming event on 4/18/2020 of formerly gay men and women uniting together for a Freedom March in Boston, Massachusetts. 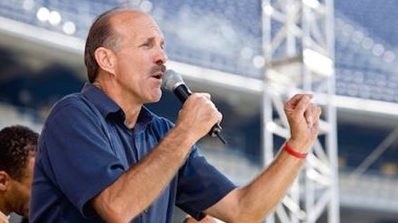 Several years ago, I was in Nashville with a prophet friend of mine. While there he had an astounding dream. He saw a wailing wall, and on the top it read, “100,000 LGBTQ Saved and Transformed.” On the wall were names of individuals experiencing confusion in their sexuality and gender. Then people began coming to the wall, laying their hands on the names, and weeping over each individual. Suddenly, one after another, the names leapt off the wailing wall over to a testimony wall because they had been freed.

Now I hesitate to share this, but in the dream, the first person being prayed for was a popular LGBTQ Hollywood figure. I was stunned by this dream. I believe God was saying much of the Church has basically built a “stone wall” against the LGBTQ community. I myself have taken a strong stand concerning gay marriage.

Over the years, I have cried out to God that I would represent Jesus rightly, and I have publicly asked forgiveness where I didn’t. I believe God is saying that He desires a wailing wall heart in His people – one of compassion, mercy, and prayer that leads to transformed lives.

So, interestingly, the following morning after my friend’s dream in Nashville, I was ministering at a Church. During worship, the leader of the prayer gathering stood up and said, “The Lord just spoke to me. We are to pray for 100,000 LGBTQ to be saved and transformed and the first person we are to pray for is this particular LGBTQ Hollywood figure.” I was in shock and knew it was the word of the Lord.

I believe this assignment of raising up a wailing wall is the fulfillment of the dream I had received years before that I was clothing the LGBTQ in white. I am asking thousands of people, Churches, and homes to have wailing walls, if not on their literal walls, then on the walls of their hearts – praying for individuals who truly want to be free from same-sex desires and from heterosexual sins and addictions.

Source: Freedom! You Said You Would Deliver Us | The Elijah List

No Comments on "Freedom! You Said You Would Deliver Us"