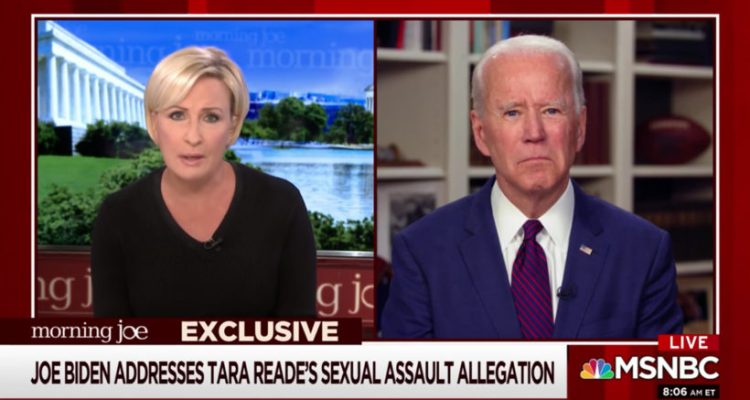 After more than a month of avoiding the topic altogether, Biden finally addressed the accusations made by former Senate staffer Tara Reade who says she raised the matter to her superiors only to be fired upon which she filed a report with the Senate.

The former Vice President appeared on MSNBC’s “Morning Joe” and was asked by co-host Mika Brzezinski about unsealing records from his time as a United States Senator to which Biden declines saying some of his positions could be used against his campaign.

Biden’s defense falls apart when Mika asks him, “Why not approve a search of [Tara Reade’s] name in those records?” Joe appeared to be caught off guard and became defensive.

Mika clarified her question and asked it again before two awkward periods of silence which were followed by a lackluster response by the former Vice President.

See the interview for yourself below:

Unfortunately for Joe Biden, he fell far short of anything resembling a sufficient response or defense at a time when more witnesses, and alleged victims, continue to come forward.

Since the release of the 1993 ‘Larry King Live’ clip last week, four witnesses have come forward to corroborate Tara Reade’s claims including a neighbor and three friends who all say they recall Reade telling them about the assault when it happened. Reade has reportedly volunteered to testify under oath about the alleged sexual assault.

Meanwhile, Democrats in Washington were all too ready to dismiss the charges made against their Party’s presumptive nominee with Sen. Kirsten Gillibrand (D-NY) saying Biden “vehemently denies” Reade’s claims before he did so. House Speaker Nancy Pelosi (D-CA) also said she was “satisfied” with Joe Biden’s defense, also before presenting one.

Lastly, the New York Times issued a public rebuke of Biden campaign talking points which purported to claim that their publication had “debunked” Reade’s claims.

All things considered, the accusations are amounting to a compelling case against Biden making fellow Democrats reek of hypocrisy due to the clear double standard demonstrated by their conduct during the Kavanaugh hearings and their deafening silence today.