Breitbart: Jewish comedian and conservative, Jackie Mason, recorded a special message for Breitbart offering his remarks, as well as criticism, of the democrats whom not a single one invited showed for the opening of the U.S. Embassy in Jerusalem. He also called the achievements of President Donald Trump as brilliant having been done in such a short timeframe as compared to eight years of the previous administration. 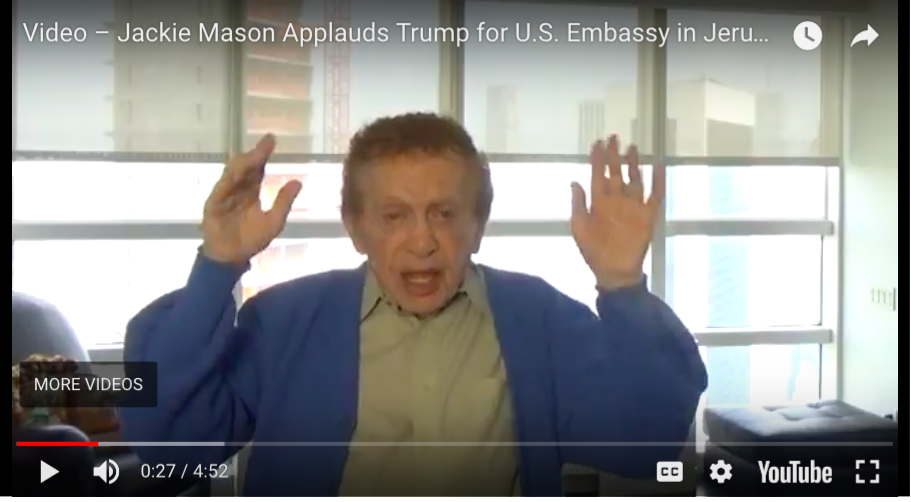 Applauding the President, Mason said “He’s a miracle worker — Trump is a revolutionary. He does things that other people promise and never do.”

Jackie slammed Democratic lawmakers — namely Senate Minority Leader Chuck Schumer (D-NY) — all of whom failed to make an appearance during this week’s opening of the official United States embassy in Jerusalem.

“Where were the Democrats,” Jackie asked. “If it doesn’t any good, they never heard about it. It’s not their field. This is unbelievable. The flaw and the fakery of the Democrats and the brilliance of Trump… Obama couldn’t create in eight years what [Trump] did in a month.”

Source: Jackie Mason Applauds Trump for U.S. Embassy in Jerusalem: ‘Something Nobody Ever Expected, He’s a Miracle Maker’ | Breitbart

No Comments on "Jackie Mason Applauds Trump for U.S. Embassy in Jerusalem: ‘Something Nobody Ever Expected, He’s a Miracle Maker’ | Breitbart"