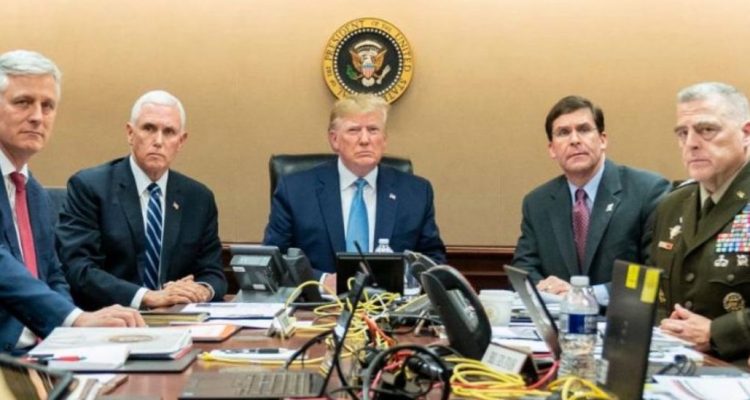 In another crippling blow to the radical jihadist group known as ISIS, the organization’s spokesman and likely successor to the late Abu Bakr al-Baghdadi has been killed by US forces.

Abu al-Hassan al-Muhajir was killed by a US airstrike in the Syrian city of Jarabulus late Sunday, just one night after Baghdadi was killed in a raid by the US military.

Kurdish General Mazloum Abdi made the announcement on Twitter saying,

“Following the previous ops, a senior assistant for al- Bagdadi is called Abu Hesen al Mouhjir was targeted in a village named Ein al Baat near Jaraboul city, the mission was conducted via direct coordination of SDF Intel & US military apart from the ongoing ops to hunt ISIS leaders.”

The news is just the latest devastating development for the once-feared Islamic terrorist group who once violently took control of large portions of Iraq and Syria.

The 45th President chimed in this morning about the news tweeting,

“Just confirmed that Abu Bakr al-Baghdadi’s number one replacement has been terminated by American troops. Most likely would have taken the top spot – Now he is also Dead!”

ISIS released a statement vowing to fight on without their founder saying in a statement,

“What the impure Crusaders do not understand with regard to the Muslims’ creed, especially that of the jihad fighters, is that jihad in its entirety is not founded on men, but on creed. The creed does not die with the death or killing of men.”

Four Americans were killed by ISIS, one of which was Kayla Mueller whom the operation that killed Baghdadi was named after.

The multiple setbacks for the extremist group are also military victories for the US, and more specifically President Trump, who finds himself just over one year from his likely re-election.

US coalition forces may have destroyed the “caliphate” in Iraq and Syria but the group...More

No Comments on "ISIS Spokesman, Likely Baghdadi Successor Killed By US Airstrike"