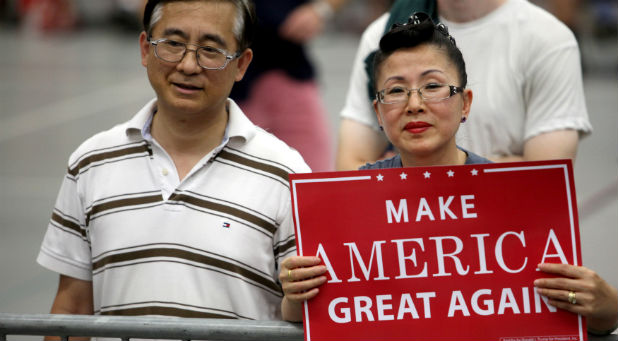 This is part 3 of a three-part series. You can read part 1 here and part 2 here.

Right after I heard the Lord tell me to “read Isaiah 45,” two words echoed in my head: “Common grace … common grace!” This is a term used by Reformed Theologians and first introduced to me while reading Chuck Colson. Ever wonder what keeps fallen man from total self-destruction? Common grace comes down upon a fallen world to keep in check the forces of anarchy. It stirs in man the ideals of virtue and justice. It is the grace that comes upon all (Christian and non-Christian) to help them affirm the good and resist the bad, personally and in institutions. It is the hidden hand of God that works to promote justice and order in a world where selfishness could produce societal collapse. “Saving grace” is what gets you saved and “common grace” is the special influence of God that comes upon man to keep society from imploding.

I liked Trump but I was wanting to hear a “saving grace” testimony. After thinking it through, I realized that “common grace” anoints some men or women for an assignment that may make them more qualified than my favorite Christian. As I read Isaiah 45, a verse jumped out at me: ” … I have even called you by your name; I have named you, though you have not known me” (Is. 45:4). Have not known Me? Suddenly I felt better about Trump. In fact, I shared all this with him—but that gets ahead of my point.

Trump falls into a unique category of individuals. These are men and women served up by the hand of providence. They are people whose singular strengths and convictions match a certain test in history—a crucible. As Churchill said, “All my life was a preparation for this moment.” Figures like Margaret Thatcher, Patton, Churchill and Lincoln do not step out of cathedrals onto the stage of history, yet we canonize them later as the instruments raised up by God to meet a singular crisis.

Curiously many of these leaders were not the darling or favorite of contemporary Christians. Preachers thought Lincoln to be a godless skeptic; they stumbled over Winston’s cigars and scotch; and they balked at Reagan’s divorce and children from two marriages. Likewise, today’s leading evangelicals have made their rejection of Trump public!

Strangely, while none of these instruments of “common grace” rose through the ranks of evangelicals, each of them ended up as a defender of Christian values. This came home to me in the most shocking way as I replayed Donald Trump, like the Scottish heir to John Knox as he shouted back to the Vatican, “I am a Christian and I’m proud of it!” It reminded me of Churchill who early on framed the contest with Hitler as a “battle for the survival of Christian civilization” He even insisted “Onward Christian Soldiers” be sung on board the ship where he and Roosevelt forged their alliance against the Axis powers. Lincoln quoted the Bible more than any President, yet refused to join any established church.

The question a Christian needs to ask, especially when their favorite candidate fails to get the nomination, is not, “Who is the most Christian?” Instead ask, “Who is the one anointed for the task?”

Trump Has the Cyrus Anointing

Common grace tells us that God acts in history in unusual ways to raise up unlikely deliverers for the sake of His purposes and His people. He disrupts nomination processes. In 1860, the pious evangelical Salmon P. Chase was a better Christian than the men he ran against, but the wily Lincoln got the nomination on the third ballot. Chase could not understand why God had denied him, but in the end the Springfield lawyer proved to be the most suitable vessel for the coming chaos.

From my perspective, there is a Cyrus anointing on Trump. He is as my friend Kim Clement said three years ago: “Gods Trumpet.” I predicted his nomination and I believe he is the chaos candidate set apart to navigate us through the chaos that is coming to America. I think America is due for a shaking regardless of who is in office. I believe the 45th President is meant to be an Isaiah 45 Cyrus. With him in office, we have an authority in the Spirit to build the house of the Lord and restore the crumbling walls that separate us from cultural collapse; even then, this national project is likely to be done as Daniel prophesied, “in times of trouble” (Dan 9:25).

People keep asking me: “Is Trump a Christian?”

Let’s remember, as much as 70% of Americans self-describe as “Christians.” These include Catholics, Presbyterians, Episcopalians, and Lutherans. Within the total population, 30% say they have encountered Christ in a “born again” experience. There are many who believe they are Christians who do not use our language. Are they trying to deceive us? No.

While meeting, Trump exposed something about himself. It happened when he revealed how he views himself in contrast to pastors and clergy. Tapping his Bible, he said, “Look, I freely admit that while you all were pursuing a higher calling I was running around building buildings and making money.” It beckons back to an earlier time in American life when “men of the cloth” were held in higher esteem.

Notice that he considers the work of ministry a “higher calling” than what he was doing when he made his billions. In some ways, this was a humbler admission than most people of wealth and affluence ever make.

Donald Trump may be shrewd but in matters regarding his faith he possesses the self-conscious candor of a man who knows he falls short but who fundamentally shares the same beliefs.

The genuineness of this connection was on full display in the acceptance speech he delivered in Cleveland where he thanked evangelicals and in a rare moment of emotional vulnerability spoke off script saying, “I don’t know that I deserve it.” This one moment reveals the true heart of the man.

This will surprise some, but Trump is more prophetic than most people realize. I think great entrepreneurs—like a Steve Jobs—tend to be prophetic. Repeatedly Trump said, “Leadership is all about seeing the future and not listening to the short-sighted thinker. This is the kind of leadership we need to turn this country around—and fast.”

He repeats this phrase a lot: “Leadership is about seeing the future.” He is Churchillian in this regard. He sees the threat nobody else has courage to talk about until it’s too late. He sees it with radical Islam, he sees it with the soaring debt, and he sees it in America’s tinderbox of the inner city. He accurately predicted by name that Brussels was no longer the same community he knew years ago, and this statement was being picked apart by the press at the very moment Brussels became the epicenter of another round of organized terror and death. Likewise, Trump predicted the “Brexit” while expert commentators in media and government were stunned. Christians should take note of this.

Media in the post-Cleveland conference of the Republican Party described Trump’s message as “dystopian” or dark. However, those who agree with Trump found the message encouraging simply because someone was finally telling the truth! A full 70% of Americans say the country is on the wrong track. Trump is very much like Churchill, lifting a warning voice about the unraveling of America at a time that the ruling class, buttressed by media, wants to deny there is anything wrong! In all likelihood, Trump is intuiting that which is on the horizon if changes are not made. And, like Churchill, the opposition wants to exile him for sounding an alarm in his disturbingly blunt manner.

Back to Trump Towers to Prophesy!

I had no intention of meeting Trump again or sharing this “Cyrus” word with anyone, let alone delivering it to Mr. Trump in person, but all that changed quickly. My friend Darrel Scott called the day after my “President Trump” experience. I shared with him what I discovered and he proceeded to invite me to join him in New York for a meeting of Trump and minorities. I pointed out that I am not exactly a minority to which he whimsically replied, “Yeah, but you’re a future minority!” I like working with Darrel so I agreed to go. Prior to our meeting, Black Lives Matter activists were in confrontation with Trump supporters in rallies and the media was all over the story. Trump wanted to meet and hear feedback from a variety of ministries assembled by Darrel. It was intense and interesting. At one-point Trump turned to the pastors and asked, “What would you do if someone came up tried to take over your service while you were preaching?” To a man, they shouted back how elders and deacons work with the pastor: “We don’t put up with that foolishness.” It became pretty clear that Trump and those gathered did not really have race issues; they had event management issues.

As the meeting ended Darrel spoke out across the room to me, “Dr. Lance, share with Mr. Trump what you told me on the phone yesterday.” I was shocked. He could see as much but repeated, “Tell Mr. Trump.” I was going to skip parts but when I did he insisted I explain it. So I shared it all and Trump took it in, telling me afterward with a hand on his chest, “What you said really, uh, it …” He was trying to say it “ministered” to him or “touched” him but he’s Presbyterian, not Pentecostal so he finally settled on, ” … that meant a lot. Really. I mean it.”

Right now I’m recalling the last words I heard him speak at a rally in Atlanta before the nomination. “I have to tell you. Get ready folks,” he warned. “The distortions of the news media and hundreds of millions of dollars in attack ads are coming. Who knows how much damage they will do? I really wonder about that. You have to get ready. They’re coming.”

How much damage will they do? We are about to find out. He is looking more and more like a man under siege. I for one will stand with him. With Cyrus Trump. I wonder how many will join me? Are you willing to become the missing grassroots needed in the final weeks? Everything is at stake.