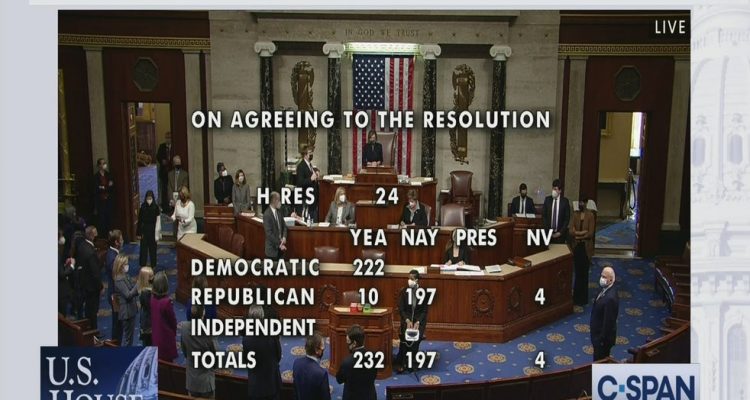 In a vote mostly along party lines, the Democrat-controlled U.S. House of Representatives today voted to impeach President Donald Trump for the second time in four years.

The move makes the 45th President the first Commander-in-Chief in American history to be impeached twice.

House Resolution 24, authored by Rep. David Cicilline of Rhode Island and co-sponsored by 217 House Democrats, passed by a vote of 232 to 197 with 10 Republicans defecting.

The Republicans who voted to impeach the president are Liz Cheney of Wyoming, John Katko of New York, Adam Kinzinger of Illinois, Fred Upton of Michigan, Peter Meijer of New Mexico, Jamie Beutler of Washington, Dan Newhouse of Washington, Anthony Gonzalez of Ohio, Tom Rice of South Carolina, and David Valadao of California.

The single article of impeachment for “inciting an insurrection” will be sent to the U.S. Senate for consideration which will not reconvene until the eve of the president’s final day in office. Senate Majority Leader Mitch McConnell has said he will not summon senators to the Capitol early. The trial is expected to go in the president’s favor as a two-thirds majority would be required to convict.

The argument against the impeachment is two-fold. Firstly, President Trump specifically asked the crowd in D.C. on January 6 to “peacefully and patriotically” make their voices heard. Secondly, another impeachment only serves to escalate political tensions which are already at a boiling point as demonstrated by the events last week. An FBI memo this week this week states that armed protests are planned in all 50 states leading up to Joe Biden’s inauguration and that some groups are threatening a “huge uprising” if President Trump is removed from office.

The Democrat-controlled House yesterday approved House Resolution 21 calling for Vice President Mike Pence to lead the effort to invoke the 25th Amendment to remove President Trump from office. The Vice President declined to take her phone call and penned a letter to House Speaker Nancy Pelosi which reads in part:

“As you know full well, the 25th Amendment is designed to address presidential incapacity or disability… I urge you and every member of Congress to avoid actions that would further divide and inflame the passions of the moment.”