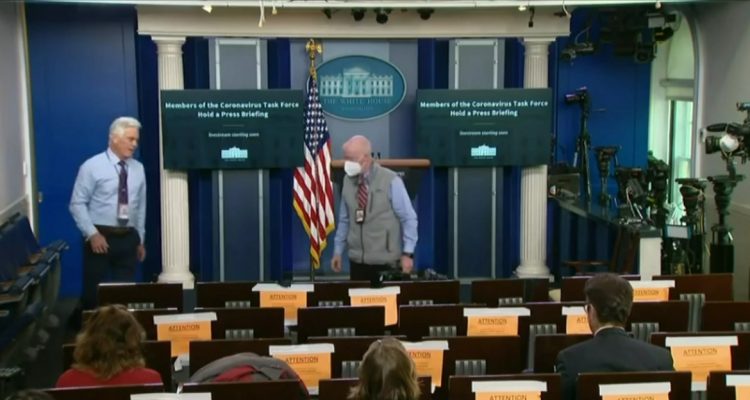 A hot mic picked up a conversation in the White House briefing room before Monday’s COVID-19 presser in which Fox newsman John Roberts and another man can be heard downplaying the threat of coronavirus.

The video begins with Roberts walking out and telling New York Times photographer Doug Mills, “You can take off the mask, the case fatality rate is 0.1 to 0.3 according to USC.”

John Roberts explains the results of a new study from the University of Southern California saying,

“USC and LA County public health came out with a study that found that there are 7,000 cases in California but they really believe there are anywhere from 221, 000 to 442,000 people who are infected.”

That part was either a joke or Mills is claiming he has been vaccinated for coronavirus which would be news to everyone else in America who have been told a vaccine may be ready for distribution sometime next year.

As the two exit the briefing room Mills can be heard saying “That’s reassuring… So it was a hoax.” to which Roberts replies saying “No, I don’t think it was a hoax.”

We can try to figure out what they meant but let’s instead focus on applying this new information to the uncomfortable living conditions of the American people.

There’s bad news and good news. One reason for the models being so wrong is that the virus is believed to be much more widespread. Consequently, millions of Americans are believed to have contracted COVID-19 unknowingly, leading to a much greater level of “herd immunity.”

During the question & answer portion of the presser, President Trump lashed out at John Roberts asking the Fox News reporter if he was “working for CNN.”

The President has grown increasingly critical of Fox News Channel in recent weeks including making more than one negative reference to a senior anchor of the network, Chris Wallace.

Watch the exchange for yourself:

Is Fear Gripping You?

Lou Dobbs, Fox’s number one show was cancelled. Why? They say it’s over a Dominion...More

The Supreme Court has once again reminded conservative voters that our work is not yet...More

No Comments on "HOT MIC: Reporter Told “So it was a hoax.” and “Everyone here’s been vaccinated…” (VIDEO)"