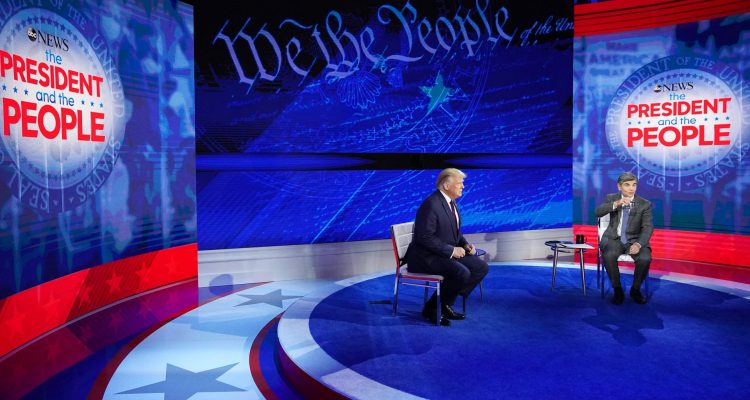 You could say President Donald Trump entered the lion’s den on Tuesday evening in the swing-state of Pennsylvania as he sat across from former Clinton White House staffer George Stephenopolous for a Town Hall event with ABC News.

The 90-minute program seemed to go well for the 45th President who appeared well-prepared for some of the more hostile questions. The main topics of discussion were COVID-19, systemic racism, and foreign policy.

The president seemed to relish in the opportunity to set the record straight on a few matters in particular like his response to COVID-19, the unsubstantiated allegations made by The Atlantic, and his “downplaying” comment to Bob Woodward.

When asked by Stephenopolous if he “regretted” anything or if there was “anything more” he could have done to protect Americans from the virus, the president declined, emphasizing that his travel bans saved millions of lives and that his administration did a “very, very good job.”

One of the most noticeable aspects of President Trump’s message was a push to repackage his recorded comment to Bob Woodward saying, “Well, I didn’t downplay it. I actually — in many ways I up-played it in terms of action. My action was very strong.” He explained that, while he wanted to keep Americans calm, his decisive action to cut off travel from China and Europe proved how seriously he took the threat.

The moderator pressed Trump on the question of “systemic racism” and its relation to police brutality to which the president seemed to carefully avoid dismissing outright. Instead, he stressed that the vast majority of police officers do a “phenomenal job” and expressed his empathy for tragedies like George Floyd and Breonna Taylor.

On healthcare, the president reassured a voter that coverage for pre-existing conditions “will always” be part of his healthcare plan and alleged that Joe Biden has embraced socialized medicine as evident in his “manifesto” he jointly released with Sen. Bernie Sanders (D-VT).

One voter asked Trump about The Atlantic’s allegation that he called fallen soldiers “suckers” to which he explained that 26 witnesses testify to the fact that the comments were never made and were “made up,” calling it “disinformation.”

Stephenopolous asked the president about comments made by former White House officials like John Kelly and Jim Mattis who Trump dismissed as “disgruntled employees.” As for John Bolton, “he wanted to go to war with everybody,” he argued before highlighting the strides his administration has made toward peace in the Middle East and with North Korea.

These were some of the top highlights from the evening. Joe Biden has reportedly declined to appear for an identical event, citing scheduling restrictions. The first presidential debate is set to occur on September 29.

The rumor of a growing rift between President Trump and National Security Adviser John Bolton...More

Trump: Kim Summit ‘Better Than Anybody Could Have Expected’ | The Hill

The Hill: In a meeting that Kim Jong Un had previously cancelled, today in Singapore...More