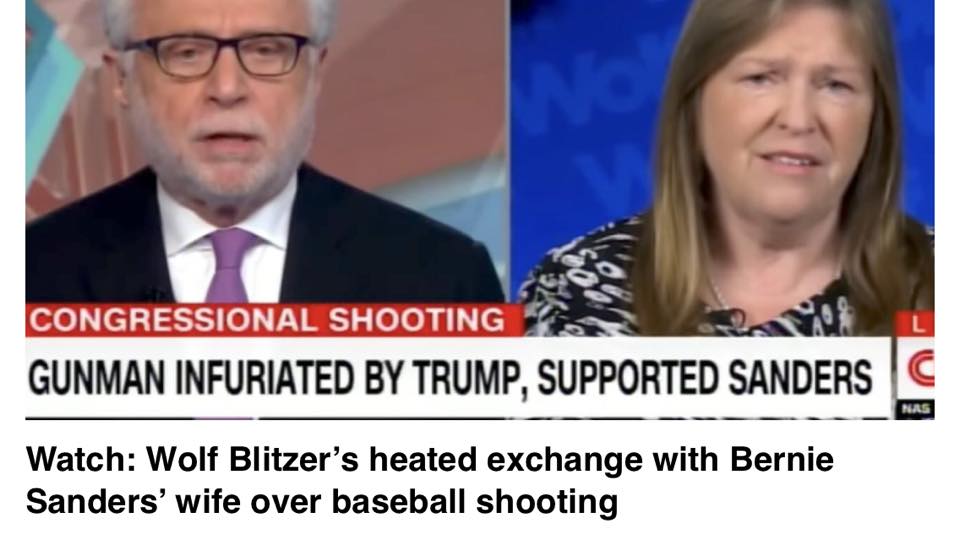 CNN anchor Wolf Blitzer faced off in a heated exchange with Sen. Bernie Sanders’ (I-VT) wife, Jane, over media responsibility after Wednesday’s shooting at a GOP congressional baseball practice.
During the interview, Jane Sanders condemned violence, claiming that it’s unacceptable, despite allegations that the shooter was a staunch Bernie supporter during the 2016 presidential election.
“This is not OK, and it’s certainly not what Bernie preaches,” Sanders said.

“We have to be able to discuss the issues without demonizing the opponent,” she said. “And honestly, Wolf, I think the media needs to look at itself as well.”

She continued, “The media characterizes every conversation as an adversarial one. Your job, the media’s job, I think, is to illuminate the facts, not fan the flames.”

“The media continues to cover the latest scandal, the latest back and forth, but not the issues so much,” she concluded her argument.
Blitzer wasn’t having it, and retorted, “If a president or a senator or someone of authority is making very, very strong statements, you want us to simply ignore those statements, if there’s a social media post, a tweet and the president says something really, really strong.”

“Do you want us to censor those words as part of the news media?” he asked. “What are you suggesting?”

Sanders said that it was the media’s responsibility to look within and do some “self-reflection.”

Blitzer defended the media and claimed that the media is always learning and always evolving.
“We [the media] certainly aren’t going to try to censor very strong statements from people of responsibility,” he added.

I have a word for you today about coronavirus and I wanted to give you...More