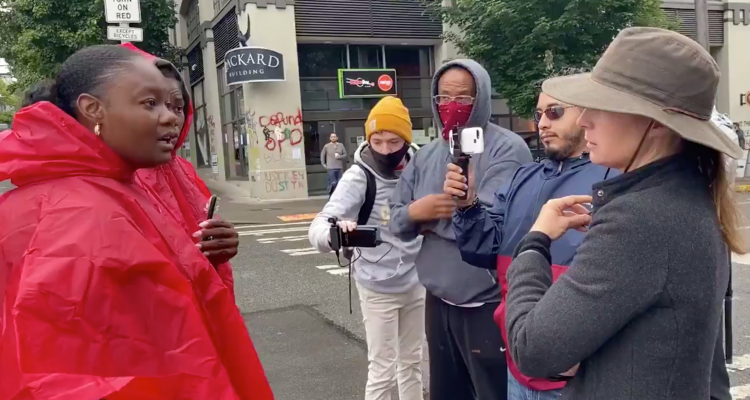 In the wake of racial tensions across America, a viral video of a conservative black woman, Bevelyn Beatty, shows her confronting protesters and activists in CHAZ (Capitol Hill Autonomous Zone) in Seattle.

Americans are WAKING UP!

Democrats are being exposed everyday!

The video garnered such attention that she was interviewed by Laura Ingraham on The Ingraham Angle earlier this week.

During her interview, Beatty did not hold back. “If you want to look at the devices of the devil, you have to look at the Democrat Party. he uses who he may and unfortunately, it’s the Democrat party… The left is so radical. They want you to ban the police. They just want Trump to give up his authorities and just let them run and turn our country into a communist country… Why in your right mind would you defund the police?”

Bevelyn Beatty, who is originally from North Carolina, is also an evangelist. She and a team travel to various locations, including Planned Parenthood clinics, and is no stranger to activism. Her ministry At The Well states, they are a “nonprofit organization dedicated to duplicating the “well experience” in people’s lives by sharing Jesus one city at a time. We endeavor to empower people, make disciples and bring the reality of who Jesus is in the darkest places.”

In a follow-up video she recorded after her interview on The Ingraham Angle, Beatty shared a synopsis of her experience, including the reason for traveling to Washington State. She stated that after she had seen a preacher accosted the week before, she and one of her team members began to fast and pray about visiting CHAZ.

During her time in Seattle, Beatty broadcasted while walking through CHAZ, which can be viewed in full here. (Warning: Language)

Dan Schultz: Take Over The Party

Don’t leave the party. Don’t innovate. Simply take it all over. Here’s a simple and...More

Best Of Rush: Remembering A Legend

https://youtu.be/85lJMK5-2CM Discover what made Rush Limbaugh the phenomenon that he was and why he impacted...More

Rise Of The Resistance

Just when we think that things have settled down a little in the area of...More