Since May 2012, Elizabeth Warren has claimed that she is part Cherokee with no evidence to back that up. Now, she’s released a DNA test that she claims proves her Native American heritage.

On Monday, Senator Warren released the results of a DNA test that showed she did have Native American heritage in her background (1/1024 to be precise). However, the Cherokee nation has deemed the test and its results “inappropriate and wrong.”

Cherokee Nation Secretary of State, Chuck Hoskin Jr. Said in a statement, “current DNA tests do not even distinguish whether a person’s ancestors were indigenous to North or South America.”

There are not many samples available from North American groups, the Senator’s sample was compared against those from Mexico, Peru, and Colombia. Most Native American groups resident in the USA have refused to participate in genetic studies, and Warren’s DNA report confirmed this.

On the appropriateness of using this DNA test to determine citizenship, Hoskin said that using “a DNA test to lay claim to any connection to the Cherokee nation or any tribal nation, even vaguely, is inappropriate and wrong.”

He then went on to say “Senator Warren is undermining tribal interests with her continued claims of tribal heritage.”

On Twitter, President Trump tweeted that ‘now that her claims of being of Indian heritage have turned out to be a scam and a lie, Elizabeth Warren should apologize for perpetrating this fraud against the American public. Harvard called her a “person of color” (amazing con), and would not have taken her otherwise!’

Unsurprisingly, it didn’t take Republicans long to jump in on the action as well. Senator Orrin Hatch, representative for Utah, tweeted his version of a DNA test, hilariously making himself part dinosaur. 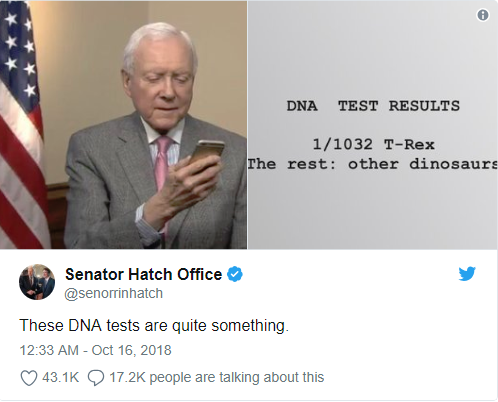